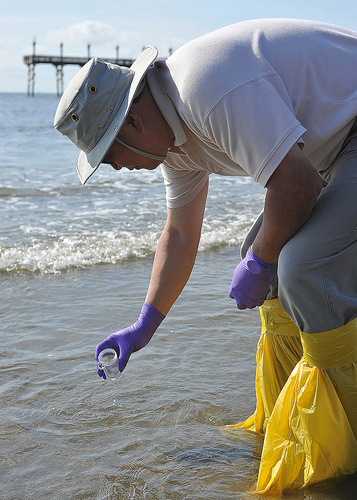 So there were no surprises last week when BP published its whitewash into the Deepwater Horizon disaster. “BP report clears BP of blame in BP disaster” was how American comedians saw it.

The fallout from the report, that concluded that “No single factor caused the Macondo well tragedy,” will continue though.

The scientific fall out continues too. Professor Samantha Joye of the Department of Marine Sciences at the University of Georgia, who has led the scientific work looking at underwater plumes, has found large areas of oil on the sea floor.

This is despite the fact that the US government said that most of the oil had gone.

“We’re finding it everywhere that we’ve looked. The oil is not gone,” says Joye. “It’s in places where nobody has looked for it.”

In some areas, Joye has found oil over two inches thick, up to 70 miles away from BP’s well. “If we’re seeing two and half inches of oil 16 miles away, God knows what we’ll see close in — I really can’t even guess other than to say it’s going to be a whole lot more than two and a half inches.”

As Joye’s findings throw up alarming implications for the long-term implications of the spill, it is becoming clear that other scientists are finding it hard to carry on their work due to lack of funding.

The New York Times reports today that many independent scientists are facing a funding crisis.

Harriet Perry, the director of the fisheries program at the Gulf Coast Research Laboratory, who discovered crab larvae covered in oil has not been able to complete her work as the money has run out.

The only federal agency to distribute any significant grant money for oil spill research, the National Science Foundation, is broke until the next fiscal year begins next month.

A $500 million pot for independent research promised by BP, “has become mired in a political fight over control” according to the Times.

Moreover, much of the scientific research is not being done to determine the long-term ecological effect of the spill, but to determine BP’s legal liability or to form part of the company’s legal defense.

And when lawyers start meddling in science there will be problems, as any veteran of the Exxon Valdez will tell you.

As the Times notes: “Scientists who participate in those efforts may face restrictions on how they can use or publish their data. More important, they do not have a free hand in determining the scope of their studies.”

One of the unanswered scientific questions remains as to what the effect of nearly 2 million gallons of the toxic dispersants sprayed either by the well-head or on the water. There is ongoing debate about how much harm they have caused. But it is likely again we will not know the truth, if scientific money dries up.

Larry McKinney, executive director of Texas A&M University’s Harte Research Institute for Gulf of Mexico Studies in Corpus Christi, Texas argues that funding for studies into the impacts of spilt oil and dispersants “waxes and wanes with oil spills, but never seems to follow through.”

He points out that, although many investigations were launched after the Ixtoc spill to explore these issues, the funding soon dried up.

Let’s hope that this time we get to find out the truth.