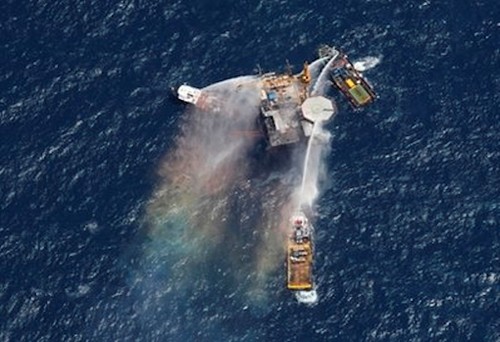 Yesterday, as BP tried to weasel its way out of its promised $20 billion payout, another Gulf rig caught fire, this time thankfully without any associated loss of life.

Vermillion 380-A, owned and operated by Mariner Energy reportedly caught fire as workers were painting and water-blasting.  There are two main points that are illustrated well by this latest accident in the Gulf:

First, the idea that small operators are somehow less dangerous than large ones is just plain wrong.  This platform was processing close to 3,000 barrels a day until yesterday.  Thats a lot of oil had it begun to spill into the Gulf.

Second, these kind of accidents, and the risk of larger disasters, are the norm for the industry.  According to the Wall St. Journal, there were 381 fires on board offshore facilities in the Gulf from 2007 to 2009.