Yesterday the reporting on 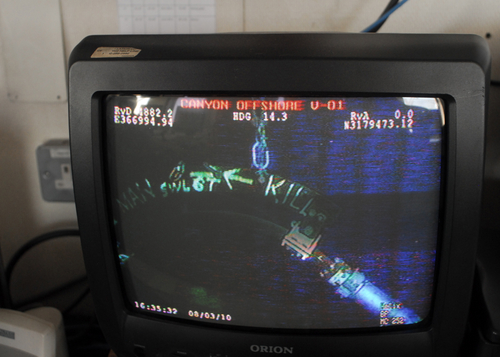 BP has successfully plugged the well, and the US government said that 75 per cent of the oil had been cleaned up.

This means the Gulf disaster was exaggerated, Tony Hayward was right after all about a small drop in a large ocean and, hey presto its essentially the end of the story…

This morning the UK’s Daily Telegraph even led with a headline: “BP spill: ‘oil has gone’.

Many people in the Gulf and scientific community are still asking the question “Gone where?” though.

Yesterday I said that the US Government’s analysis that 75 per cent of the oil has “gone” would be controversial and so it is proving to be.

The New York Times, that originally reported the findings, notes this morning that “some researchers attacked the findings and methodology, calling the report premature at best and sloppy at worst.”

The paper quotes Samantha Joye, a marine scientist at the University of Georgia who has led some of the most important research on the Deepwater Horizon spill, as saying:

“A lot of this is based on modeling and extrapolation and very generous assumptions. If an academic scientist put something like this out there, it would get torpedoed into a billion pieces.”

Joye has been leading the sampling of oil in the deep-water. Writing on her blog, earlier this month she wrote “it’s likely that a great deal of oil is still out there in the Gulf of Mexico’s waters, it’s just no longer visible to us …  The fact that this oil is “invisible” makes it no less of a danger to the Gulf’s fragile ecosystems.  Quite the contrary, the danger is real and the danger is much more difficult to quantify, track and assess.”

Essentially what we do not know is how much oil is still in the deep water and what the impact of the oil has been on small larvae in the water column.

What we also do not know is how the dispersants have behaved at deep water at what their impacts are. This became clear from testimonies to the Senate from scientists yesterday.

Edward Overton, a Professor Emeritus, Department of Environmental Sciences, School of the Coast and Environment, Louisiana State University, who has over 34 years experience studying the environmental impacts of oil spills, said:

As regards the larvae and other small marine life, Overton did point out that: “Dispersant use will enhance the damage to these tiny organisms because it spreads the oil below the surface rather than leaving the oil concentrated on the surface.”

Other scientists who testified agreed.

David Smith, Professor and Associate Dean, Graduate School of Oceanography, University of Rhode Island said “Dispersants do not remove oil from the ocean and therefore it is important that we not adopt an ‘out of sight, out of mind’ attitude. Moving oil below the sea surface presents significant challenges to the organisms residing in this habitat. Impacts will be less noticeable, but could be as devastating as oil washing ashore.”

Ronald Kendall, the Director of the Institute of Environmental and Human Health, at the Department of Environmental Toxicology, Texas Tech University said: “it is recognized (and accepted once the decision is made) that dispersant use increases exposure potential for water-column and benthic organisms.”

He also said that contrary to the Government scientists he believed “that the extensive use of dispersant has resulted in much of the oil released from the Deepwater Horizon site to remain suspended in the Gulf, dispersed in the water column.”

Considering much of the Gulf relies on fishing for its livelihood, the use of dispersants may still be something that comes back to haunt the region, especially if it caused long term harm to fish and shrimp.

Even taking the government’s estimate the remaining oil still amounts to more than five times the 262,000 barrels that entered Prince William Sound during the Exxon Valdez disaster and could remain a problem.

Geoffrey Maitland, professor of energy engineering at Imperial College London, tells today’s Financial Times that: “The non-biodegradable dispersants, which may hang around much longer than the oil and do absorb on fish gills and other marine life organs, causing life-threatening problems, are in my mind a bigger longer-term environmental concern”.

So no matter what the headlines, as the NYT’s reports today: “Federal scientists and coastal residents agree in at least one respect: that the long-term effects of the spill are unknown, and that it is too early to make any conclusions about the true scale of the damage.”

Indeed, if we learnt anything from the Exxon Valdez it is this: Only time will tell.