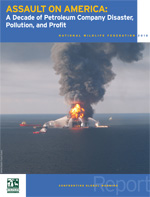 Peter Voser, Shell chief executive, argued that deep-water drilling still had an important role to play in global energy supply. “We have got growth potential there”.

But what cost is this growth?

Even the industry’s own trade magazines are questioning the business as usual scenario. One such magazine, Petroleum Economist, recently warned that the “majors’ search for oil increasingly requires Olympian efforts: deeper, trickier, pricier.”

The Deepwater disaster was evidence of when this effort went badly wrong. “Oil is ravaging the coastline of history’s most flagrant oil addict, a country whose craving for cheap petroleum has dominated its foreign policy and encouraged the risk and adventurism of its companies.”

The magazine warned that that “The symbolism of the oil spill in the Gulf could do more than anything else to accelerate the West’s approach to a post-oil world. “

And this is just what is now happening. Those regulators weighing up whether to let full-scale drilling resume in the Gulf or move to a post-oil world, might want to read the National Wildlife Federation’s new report “Assault on America: A Decade of Petroleum Company Disaster, Pollution, and Profit”.

The report alleges that “The oil industry is running ads asserting that this is an exceptional ‘once-in-a-lifetime’ event for an otherwise safe and responsible industry. But this is the fourth major oil spill in 33 years in North America”.

But, as the NWF point out, “major oil spills are really only a small part of the real story. From 2000 to 2010, the oil and gas industry accounted for hundreds of deaths, explosions, fires, seeps, and spills as well as habitat and wildlife destruction in the United States. These disasters demonstrate a pattern of feeding America’s addiction to oil, leaving in their wake sacrifice zones that affect communities, local economies, and our landscapes.”

The report provides a sampling of the oil and gas industry’s performance over the past 10 years, and it is pretty damning stuff:

We have been here before, after the Exxon Valdez spill, the industry promised to clean up its act. As the NWF point out: “We were told that spill prevention plans, better safety  procedures, and improved technology, would help eliminate spills, fires, explosions, leaks and seeps.”

Int continued: “Yes, this was supposed to be the era of no more leaky river barges, no more oil refinery smog, no more worker deaths and injuries, no more well blow-outs, and no more underground tank farm plumes or gas station oil seepage into groundwater or beneath neighboring communities.”

The NWF alleges that its report shows that “This industry continues to knowingly endanger its own workers, the environment, wildlife, and our communities in states across the nation. The total cost of the status quo —– in lives lost and health risks as well as social and environmental degradation —– is far too high.”

It argues that the legacy of the Deepwater disaster is that, we need to take a much “closer and more comprehensive look at the full and continuing costs that the oil and gas industry continues to impose on society with its pollution, environmental degradation, habitat destruction, wildlife loss, worker and community endangerment, health effects consequences, and loss of life.”

They conclude:  “Now is the time to enact laws that favor and encourage safe and clean energy development and remove federal subsidies and tax advantages for oil and gas development”.

They are arguing for the beginning of the post-oil world.