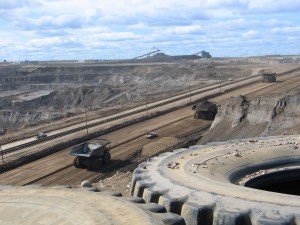 From one disaster to another..

Early on during Deepwater, I blogged on how the Canadians were looking to exploit the spill to push their dirty oil.

The fact has not been lost on the industry bible, the Petroleum Economist, (PE) which notes in its July edition that “whisper it, but the US’ misfortune could be Canada’s gain”.

The magazine notes that any ban “on drilling offshore the US – temporary or permanent – and the likely political fallout that will force stiffer regulation on oil and gas companies operating in the US should mean a greater reliance on Canadian energy”.

Indeed another article in the same July edition argues that a year after the tar sands development slowed down the boom times are returning:

“In the world’s biggest natural oil slick, confidence is back” argues PE. “The oil sands have shrugged off the recession, steady output growth is under way and in Calgary, the capital of Canada’s oil industry, the talk is of how to manage the next boom.”

What a difference a year makes. A year ago the oil industry shelved almost C$100bn of tar sands projects. However this was “not, it turns out, so much a collapse as a pruning of weaker branches. New growth in the oil sands, believes the industry, will be healthier for the correction.”

The Canadian Association of Petroleum Producers (Capp) now says the region can look forward to steady growth from 2.2m barrels a day (b/d) in 2010 to 3.5m b/d in 2025. The optimism reflects growing faith in the international oil price as well as further investments by the Chinese in the region.

China’s investment is “fundamentally altering the atmosphere in the oil sands” argues PE with Alberta seeing “Asian interest as a strategic boon.”

But, not withstanding the Chinese investment, the magazine argues that it looks like exports will rocket to the US.  It predicts that by 2030, Canadian bitumen could account for 36% of US oil and refined products imports, compared with 8% in 2009.

That is a huge increase. However a recent report by the ethical investor group CERES, argues that the environmental and financial risks associated with the tar sands could be “even greater” than drilling in the Gulf of Mexico.

The report argued that “Most of these risks are related to the energy- and water-intensive nature of oil sands production, risks that will only increase as the industry seeks to double or even triple production in a world that is increasingly becoming water- and carbon-constrained”.

And in contrast to the optimism expressed by PE, the CERES report argues that, far from rapid growth to the US, this market is “jeopardized, by emerging low-carbon fuel standards in the U.S. that will require a lower carbon intensity in transportation fuels”.

CERES  concludes that tar sands production will become “increasingly risky in the years ahead”.

The tar sands may be booming again, but how long before we have another bust..