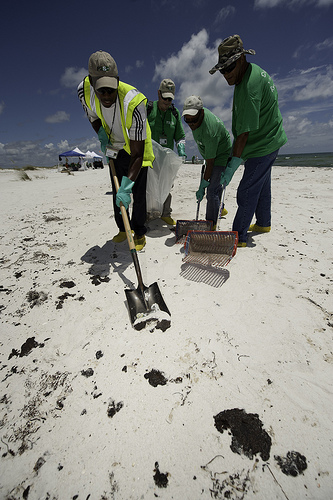 So we are 100 days into this disaster and what has changed?

Well we have a new CEO of BP. The straight talking American Bob Dudley argues that the Gulf of Mexico spill has been “wake-up call not only for BP, but the oil and gas industry overall”.

But will this wake-up call change the industry for the better in the long-term?

For BP – it seems that the company will survive this spill after all in the short-term, but what the corporate beast will look like after various assets are hived off remains to be seen.

But long-term survival is still no means certain.

Dudley has said he did not underestimate the task ahead but added that BP was “financially robust” and boasted “enviable” assets and staff. “I believe this combination – allied to clear, strategic direction – will put BP on the road to recovery,” he said.

This road may we be rocky and indeed still end in a dead-end. Much will depend on the oil price and what BP can get for its assets. Moreover, in putting aside some $32 billion for this spill, BP is making a huge gamble that it will not be found “grossly negligent”.

In a research note, Credit Suisse said there was still a risk this might happen, which could lead to much higher fines – maybe an extra $10 billion.

There is no way that BP knows that it will not be found criminally negligent. A team of federal investigators known as the “BP squad” is only just assembling in New Orleans to conduct a wide-ranging criminal probe that will focus BP and its contractors Transocean and Halliburton.

The investigators are examining potential violations of environmental laws as well as whether company officials made false statements to regulators, obstructed justice or falsified test results for key safety devices such as the rig’s failed blowout preventer.

What we do know is that charges will not be any time soon. One official told the Washington Post “you can bet on it being more than a year before any kind of indictment comes down.”

How much has the spill really changed the strategic direction of BP? BP’s new CEO has promised to “different company” more focused on safety.

As Guy Chazan writes in the Wall Street Journal: “Dudley told reporters that there was “no question” the U.K. oil major would become a “different company” in the aftermath of the Gulf disaster. Still, he also projected a message of continuity.”

Continuity not radical change. The super tanker may have changed a degree in direction, it hasn’t turned around.

As Chazan says: “Yet even after all that, some investors complained that BP had missed an opportunity to clean house and make a definitive break with its troubled past. And the company’s apparent success in capping the ruptured well—which has helped produce a rebound in its pummeled stock price—may have made BP less inclined to perform more radical surgery.”

This radical surgery would have been more than to impose Dudley – an American oil-man to his bones – to appease American politicians. BP could have signalled that it now understood the risks of deep offshore drilling were too great and that it was really going to go beyond petroleum and change direction.

But that is not going to happen. We are going to get a cosmetic face lift in the leadership. As soon as the anger subsidies, there is a real danger that BP and the other oil companies will be allowed to carry on drilling ever deeper, just as before.

So its back to business as usual, with a slightly better regulatory regime and tighter safety standards.

The disaster certainly has been a wake-up call for the residents of the Gulf who have watched the toxic result of a corrupt and lax regulator failing to oversee an industry who was operating to unacceptable safety standards.

So for those residents of the Gulf everything has changed, especially those who make their lives from the sea.  When the fisherman will be allowed to return who knows?

The good news this morning is that, as the New York Times reports: “The oil slick in the Gulf of Mexico appears to be dissolving far more rapidly than anyone expected”.

But no one is assuming just because the oil is disappearing from the surface that the disaster is somehow over.

“Less oil on the surface does not mean that there isn’t oil beneath the surface, however, or that our beaches and marshes are not still at risk,” Jane Lubchenco, administrator of the National Oceanic and Atmospheric Administration, said yesterday. “We are extremely concerned about the short-term and long-term impacts to the gulf ecosystem.”

“Surface is one thing; you know that’s going to dissipate and all,” Mickey Johnson, who owns a shrimp boat in Bayou La Batre, told the Times, pointing out that shrimpers trawl near the sea floor.

“Our whole big concern has always been the bottom,” Johnson said.

And what is going on at the bottom no one really knows.

You still have a feeling that even 100 days in, we really have no idea what the long-term effects on the ecosystem of the Gulf will be.

But the pressure from the industry will be to resume drilling ASAP.