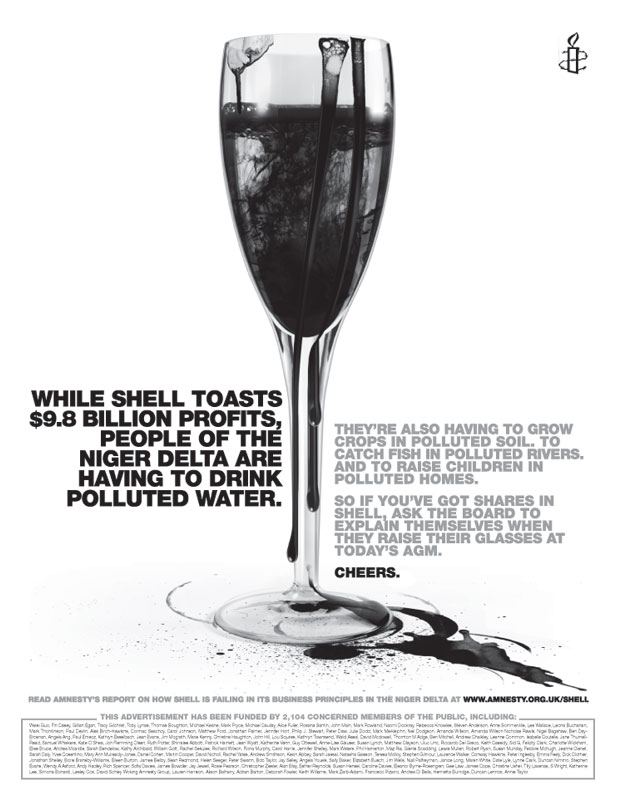 Years ago, when the environmental organisation Greenpeace was running a campaign against Ford in the UK, the liberal Guardian newspaper refused to run one of Greenpeace’s anti-Ford adverts.

At the time, Ford was one of the largest advertisers in the Guardian and it threatened to pull all its adverts if the Guardian ran the Greenpeace ad.

It took the paper’s consumer affairs correspondent to write about how his own paper was being censored for the story to be told to the world.

The correspondent nearly lost his job, but a myth had been busted. When it comes to advertising in the press, raw money and power often prevails, no matter what the papers say.

And so it has happened again. Yesterday Amnesty International – hardly a bastion of radical communism – had intended to have an advert targeting Shell in three British papers: the Financial Times, The Metro and the Evening Standard. The advert was timed to coincide with Shell’s AGM.

The advert focused on the appalling human rights record of Shell in Nigeria. It compared the company’s $9.8bn profits with the consequences of pollution caused by the oil giant for the people of the Niger Delta. This is hardly a controversial topic and has been written about repeatedly over the years.

Amnesty has also launched a new hard-hitting online video focusing on Shell’s illegal practice of gas flaring in the Delta.

The advert appeared no problem in the Standard and Metro, but the Financial Times pulled it at the last minute, no doubt under pressure from Shell.

It is hardly a coincidence that for years the FT has run all the puff-pastry advertising by Shell from the dark days after Ken Saro-Wiwa’s murder in the mid-nineties to today.

Tim Hancock, Amnesty International UK’s campaigns director, said: “The decision by the Financial Times is extremely disappointing. We gave them written reassurances that we would take full responsibility for the comments and opinions stated in the advertisement.”

The Financial Times tries to pride itself of being the voice of business. But it should not become the PR machine for Big Oil.

So its no FT, no comment, no critical adverts either = No problem  (unless you want to read the truth)