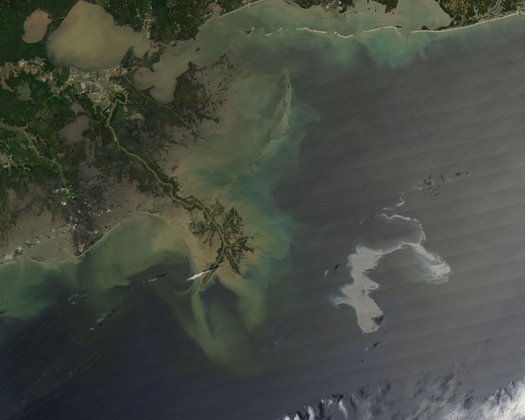 “What the hell did we do to deserve this?” is the question, baby-faced BP CEO Tony Hayward apparently asked his stunned fellow BP executives as they saw billions wiped off the company’s share price due to the Gulf of Mexico oil spill.

The reason for the shareholder panic is that much more oil is escaping than previously thought and the growing realisation that this could be America’s worst environmental disaster.

There is also a growing realisation that in the first week of this disaster BP deliberately underplayed how much oil was leaking in order to downplay the ecological threat.

But now the cat is out the bag.

It is incredible that it is only a week ago that BP was saying that, in the immediate aftermath of the explosion, that the spill did “not appear to have caused a leak”,

What a difference a week makes. Last night the spill was said to be the size of Jamaica, with devastating news that the oil had reached the shore in Louisiana.

Once again the disaster shows that the only truly effective way to respond to a spill is not to spill in the first place.  BP with all its mobilisation of workers and boom has failed to stop the oil reaching the shore.

BP has laid 100,000 feet of booms – but this is a tiny proportion needed to protect the vast creeks and rivers of the Gulf Coast.

And the booms don’t work. They are being overwhelmed by 5ft waves of oily water in the choppy seas.

BP seems totally overwhelmed by the task at hand and Obama has responded by calling in the military.

You have to ask, where were all the sophisticated spill response plans and action plans put in place waiting to respond to a disaster like this?

They were the words of a desperate man.

Just stop and think about it – the US oil industry is meant to have the highest safety, regulatory and spill response standards  in the world– we are not talking Nigeria here.

And yet with every day the news coming out, there are further revelations that are shocking. The latest is that a key safety device was not being used on the rig.  The Wall Street Journal has reported how:

“The oil well spewing crude into the Gulf of Mexico didn’t have a remote-control shut-off switch used in two other major oil-producing nations as last-resort protection against underwater spills.”

The paper continued: “U.S. regulators don’t mandate use of the remote-control device on offshore rigs, and the Deepwater Horizon, hired by oil giant BP PLC, didn’t have one. With the remote control, a crew can attempt to trigger an underwater valve that shuts down the well even if the oil rig itself is damaged or evacuated.”

No surprises that the US did consider requiring remote-controlled shut-off mechanisms several years ago, but the oil companies lobbied against the measures.  The companies argued that other safety features were adequate.

Once again we have an industry that has put profit over safety and environmental concerns. BP’s name is now becoming synonymous with reckless environmental damage.

“In the last two years, it seemed BP had really cleaned up their act,” argues Fadel Gheit, a managing director and oil analyst at Oppenheimer & Company. “Now it looks like a house of cards that has totally collapsed.”

The wider fall-out is now beginning. It would be political suicide for Obama to press ahead with offshore drilling right now.  The administration is said to be rethinking its commitment to offshore drilling in light of the accident.

The Interior Secretary Ken Salazar has also ordered an immediate safety review of the 30 offshore drilling rigs and 47 production platforms operating in the deepwater Gulf, and is sending teams to conduct on-site inspections.

But the greatest danger to – and anger from – is the local area: where the creeping oil sheen threatens  endangered marine life and fisheries, including one of only two breeding grounds worldwide for Atlantic bluefin tuna.

More than 400 species are threatened by the oil, including wading birds, sea otters, whales and endangered turtles. The spill could not have come at a worse time as it is spawning season for fish and the migratory season for birds.

Bobby Jindal, the Louisiana Governor, has said that at least ten wildlife management areas and refuges in his state and neighbouring Mississippi are in the oil plume’s path.

It is the locals – from the fishermen, to the wildlife guides, to the kids who play on the beaches – who should be asking the question “What the hell did we do to deserve this” and not the top brass of BP.