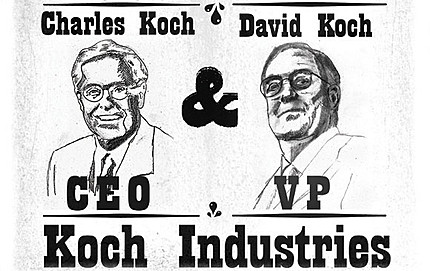 Exxon has often been signalled out as the company doing the most to undermine the science of climate change.

But this is no longer the case.

There is a new secret climate sceptic funding machine and it is called Koch Industries, the oil and manufacturing giant that is the second largest privately-held company in America.

Their owners like to joke that Koch Industries is “The biggest company you’ve never heard of” and it is probably true: most Americans have probably never heard of them and ask anyone in Europe and they would draw a blank too.

The reason is simple: there are no Koch-branded consumer products, the company sells no shares on the stock market. It has few of the disclosure requirements of a public company. It remains invisible to the public eye.

But over the last few years, the secretive billionaire brothers behind Koch Industries – Charles and David , who are two of the top ten richest people in the US, have quietly funnelled a staggering US$50 million to 35 conservative and libertarian groups, as well as more than 20 congressmen and senators pushing the sceptic agenda.

A new report from Greenpeace has tracked the money from Koch Industries to funding climate denial. Their report has found that from 1997-2008  the Koch brothers pumped double ($48.5 million) the amount that Exxon ($24 million) spent on undermining climate action. From 2005-2008, Koch donated nearly three times as much as ExxonMobil.

Greenpeace argues: “It’s now crystal clear – and every journalist, scientist and politician needs to know – that denial of climate change is not something based on healthy scientific scepticism and debate: it is manufactured and bears the “Koch” brand”.

The environmental organisation accuses Koch of now being the “ financial kingpin of climate science denial and clean energy opposition.”

Its report says:  “The company’s tight knit network of lobbyists, former executives and organizations has created a forceful stream, of misinformation that Koch-funded entities produce and disseminate. This campaign propaganda is then replicated, repackaged and echoed many times throughout the  Koch-funded web of political front groups and think tanks”.

Some top recipients of Koch money include:
•    Mercatus Center –  Total Koch foundation grants 1997-2008: $9,874,500. The Mercatus Center is a conservative think-tank at George Mason University, in which Charles Koch sits on the Board of Directors.
•    Americans for Prosperity Foundation (AFP) – $5,176,500 received from Koch foundations 2005-2008.  Beginning in 2008, Americans For Prosperity organised fake ‘grassroots’ local events across the US including the “Hot Air Tour”, featuring a hot air balloon, that was intended to build opposition to US legislation on clean energy and climate change.
•    The Heritage Foundation – US$1,620,000 received from Koch foundations 2005-2008 [Total Koch foundation grants 1997-2008: US$3,358,000]. The Heritage Foundation is a conservative think tank that misinterprets science and policy regarding the climate and uses its conclusions to argue against action against climate change.
•   Cato Institute – Total Koch foundation grants 1997-2008: US$5,278,400. The Cato Institute focuses on disputing the science behind global warming and questioning the rationale for taking action.