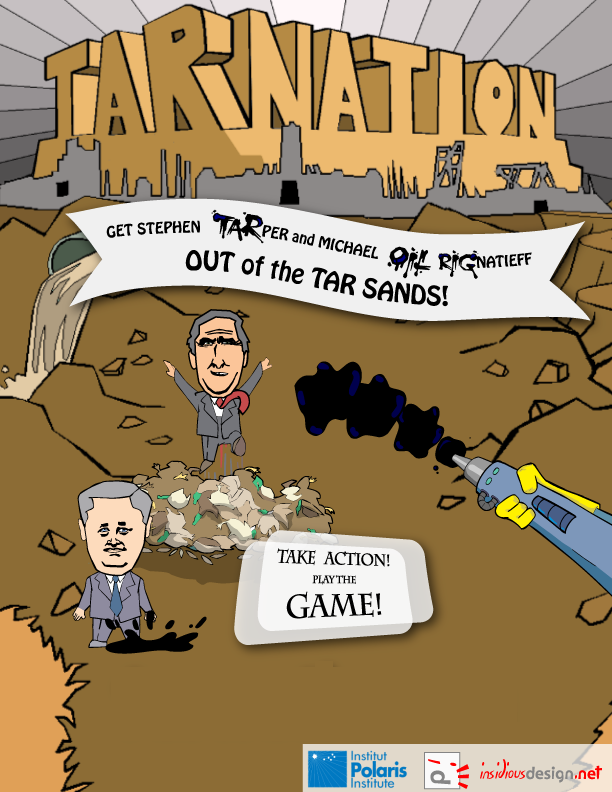 For all you online gaming enthusiasts out there, it may not have the sophistication of Call of Duty or World of Warcraft, but if you had ever wanted to vent your frustration about the tar sands, this is the game for you.

A new video game, Tar Nation, allows players to spray oil on Canadian Prime Minister Stephen Harper and Liberal leader Michael Ignatieff, as a criticism of their support for the development of the tar sands.

The brain-child of the Polaris Institute, the game allows someone to blast the politicians out of the tar sands.

But having tried it, you have to work hard to blast them out!

“The object of the game is to get Mr. Harper and Mr. Ignatieff out of the tar sands, by which we mean to change their policies in support of the mega-development and its destructive impacts,” argues Polaris’ director Tony Clarke.

“The tar sands machine perpetuates our dependence on dirty fossil fuels and prevents us from making the urgent and necessary transition to renewable energy sources and a clean energy economy.”

The game has been posted on Tarnation.ca, as well as Facebook and other online gaming sites. Already it has received thousands of hits

The Canadian Association of Petroleum Producers is said not to be “amused” by the game.

“Using guerrilla marketing tactics to distract people from the realities of energy production may be entertaining but it’s not informative or constructive,” said CAPP spokeswoman Janet Annesley.

As if the oil industry had never used guerrilla marketing techniques before….

If you want to play the game go here.