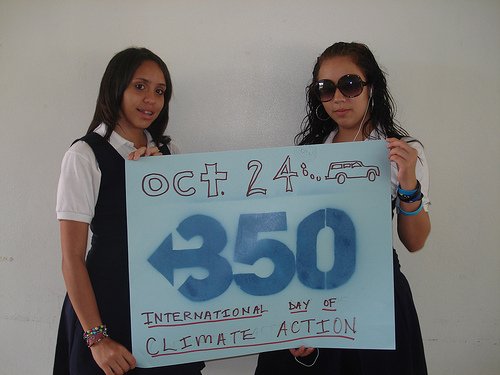 Are you ready for Saturday’s International day of climate action? The campaign organisation 350.org is calling on people around the world to organize an action this Saturday on October 24.

What started out eighteen months  ago as a idea promoted by author/climate-change activist Bill McKibben and a few students, 350.org has gone global.

The Web-based network says it has nearly 200,000 activists in dozens of grassroots groups spread across 170 countries.  What makes 350 so amazing is that it has empowered people to demand action on climate, across cointinents and countries.350.org has organised the day of action to show the world’s leaders that there is a demand for an agreement in Copenhagen in December.

350.org is named after the atmospheric concentration of CO2 in parts per million that climate expert James Hansen says must be pegged below to avoid catastrophic climate change. As we have already past this number and levels are around 385 ppm of carbon dioxide, action is all the more critical.

The growing protest movement has taken McKibben by surprise. “It has worked beyond our wildest expectations,” McKibben says. “We’ve basically got the whole world organised, much of it for the first time. October 24 is going to be, by a very large margin, the most widespread day of environmental action ever.”

It’s certainly the most widespread day of environmental action ever—as far as the organisers believe. And it’s all been done without much coverage from mainstream radio, TV and the newspapers. It’s been the web where the news has been spread.

No matter where you live, there will be something going on – events are planned in Afghanistan, in Iraq, Iran, and in the coup-ridden capital of Honduras.  Underwater on the Great Barrier Reef, and on the shores of the Dead Sea in Palestine and Israel and Jordan. On the top of Everest.

There will be actions in 300 Chinese cities, and just as many places in India. And in a thousand American cities and towns. Australia will see more than 160 actions, including 350 tall ships that will glide by the Sydney Opera House.

“Even if we do everything right from here on in,” McKibben says, “it will be a long time before we’re back to 350 — the youngest people on the planet will be elderly. Temperatures will continue to go up, and a lot of damage will be done. What we are working for is to prevent change so large that civilization itself will be challenged, and that’s still possible (we hope). But only if we get to work right away.”

And that starts Saturday…