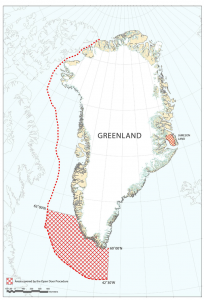 Anyone who regularly reads this blog  – or any other oil-related one – will know that the oil majors are running out of places to find oil.

That’s why countries with huge reserves such as Iraq and Libya are seen as so important.

The vast majority of known reserves are locked up in the Middle East, or are held by countries – such as Venezuela – that have recently renationalised contracts, making getting access to oil more difficult.

This means that in their search for oil the companies are having to go further into the Arctic and deeper offshore into depths that until a few years ago were deemed impossible.And one Arctic country is suddenly causing a lot of excitement, especially with its “open-door” policy where bids are warmly welcomed.

And that country is Greenland that could be sitting on a staggering 50 bn barrels of oil, if the US Geological Survey has got its sums right. The Survey puts Greenland in the top ten countries for unexplored oil.  So of the estimated 160 barrels of oil in the Arctic –  nearly a third could be in Greenland.

Putting it another way, the North Sea has produced about 38 billion of oil. Greenland could have more.

Such is the risk though, there could be billions of barrels of the stuff or there could be nothing.  Not one drop of oil has ever been found in Greenland. “Nobody knows if there is any commercial oil at all”, says Hans Kristian Olsen, the CEO of Greenland’s State Oil company, Nuna Oil.

But this has not stopped the oilmen’s pulses from racing.

Once dismissed as too expensive and technologically impossible, Greenland is now seeing an offshore exploration boom. There are now eight seismic exploration vessels trawling the seas off western Greenland looking for signs of black gold.

In the past two years seven companies, including Exxon Mobil, Chevron and Britain’s Cairn Energy, have bought exploration blocks off western and southern Greenland.

They could be ahead of the pack.  Next year, the state-owned oil company Nuna Oil, will auction off new blocks next year.

One of the key companies is British independent Cairn energy, which has secured major exploration rights in the south and west of Greenland.

Mike Watts, chief executive of Cairn, said “It’s very exciting to find yourself as an early entrant in one of the world’s top ten countries. It’s a bit like looking at the North Sea in the 1960s. We’ve identified about 14 structures in Greenland which on their own could be three or four billion barrels.”

And for once the oil companies like Cairn are being welcomed with open arms as Greenland needs all the help it can get. Nuna Oil, the state oil company, employs only seven people.

But as the last Arctic oil rush begins we must not forget that the history of the oil industry is a bad one, with repeated broken promises, pollution and adverse impact on wildlife.

We know that, in the fragile pristine seas of the Arctic, oil and water do not mix well.