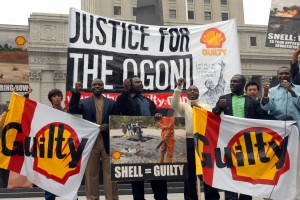 As the news sinks in of the Shell settlement, emails have been pouring in this morning asking what does it mean for the plaintiffs, the Ogoni and ongoing struggles on human rights and the environment?

People are asking whether this is a victory for the Plaintiffs or a victory for Shell. You would have to argue it is definitively the former.

Despite Shell’s overpowering legal and financial might it has had to pay a significant sum of moeny to the plaintiffs and the Ogoni. The good news is that, in the court of public opinion, Shell is guilty, even though the company has admitted no liability. You do not pay over $15 million for no reason.

For Ken Saro-Wiwa’s son, Ken Wiwa, there is no doubt that this is a moment not of celebration but of pragmatic relief that some kind of line can be brought under his struggle to fight for justice for his father. Writing in today’s Guardian he says: “There was no hat-in-the-air moment, no popping of champagne corks … Anti-climax doesn’t quite describe this moment.”

He continues: “In the end a settlement is a compromise; both parties agree to settle their differences by meeting in a so-called middle. That middle is a matter of perspective of course. To some this must be bewildering. To others it was too long in coming. In the end it is only those who are intimately involved, who have everything to lose and everything to gain that have to make a decision that will not satisfy everyone.”

In weighing up whether to settle or not the plaintiffs would have been swayed by the offer of hard cash to help the Ogoni. So $5 million of Shell’s money will create the Kiisi Trust. The name “kiisi” means “progress” in Ogoni. This Trust will allow for initiatives in Ogoni for educational endowments, skills development programmes, agricultural development, women’s programmes, small enterprise support, and adult literacy.

But that is not all. There is no doubt that, even though it never finally made it to court, the case will have legal ramifications: Ken Wiwa argues that “History will show that this was a landmark case. Multinationals now know that a precedent has been set, that it is possible to be sued for human rights violations in foreign jurisdictions.”

This case will continue to make waves in other ways too. Another by-product is a myriad of new documents that show the true depth of collusion between Shell and the Nigeria. These documents show that Shell has consistently lied to the public and its shareholders about the extent of its relationship with the military. It colluded with the higher echelons of the military junta. These documents will make embarrassing reading for other players in the drama such as the British government too and its secret involvement in the affair.

Shell has also lied over its environmental impact of operations. It has consistently obfuscated the truth over issues such as gas flaring and routine pollution. It’s well orchestrated and insidious public relations plan to outwit its critics has now also been laid bare.

But no PR campaign can hide the truth forever and faced with the facts Shell settled.  As Steve Kretzmann from Oil Change  noted last night “Lawyers told us quite clearly that one of the main reasons that Shell settled was because of the media and activist pressure that we brought.  Just a few months ago, a lawyer close to Shell told us that they would settle “when hell froze over” and he “skated on it”:  But that was before our ShellGuilty campaign.  Over 11,000 of you sent messages to Shell, and we hit them around the world in the media.  That pressure made all the difference.”

But Shell will be wrong if it thinks that by getting its cheque-book out, this will be the end of the story. The company is routinely flaring in the Niger Delta despite years of promises to switch them off. There is still routine pollution. All these issues and many more must be addressed before there can be justice for the people of the Niger Delta.

But then the plaintiffs recognise that this is not the end of the story.

As they say: “To our people, we say Ake, Beenu, Nonu, Sitam. The struggle continues.”