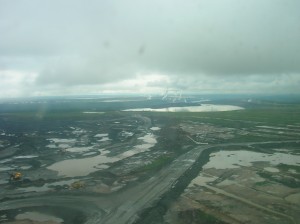 Warren Buffett and Bill Gates are not the only ones who have been touring Alberta’s Oil Sands recently.

Oil Change’s Kenny Bruno has just visited the region as part of a delegation of environmental groups. Here is his first dispatch, which is the first of three posts from Kenny..

Kenny writes: “As we approached the tar sands area in a small plane coming from the First Nation community of Fort Chipewyan in Northern Alberta, an experienced visitor tried to scare me: “You Are Entering Mordor.”

For those unfamiliar with the Dark Lord Sauron’s dwelling place in The Lord of the Rings series, imagine the landscape He Who Shall Not Be Named might choose if he could vanquish Harry Potter and retire to Brobdingnag. Or just think of Hell.

“There are a lot of polluted places on this planet, but the nightmare vision presented by Athabasca tar sands is unique, because the area is a complex of three types of polluting facilities, all on colossal scale.”

There are the monstrous open pit mines, where the “overburden” (aka forest, plants and soil) has been removed to get at the bitumen underneath. Nearby are the “upgrader” plants, which look and smell similar to giant refineries you see in New Jersey, Louisiana, and Texas, though the material they process is much thicker. Finally, the “tailings ponds” which might be better thought of as Tailings Seas, since they are veritable oceans of toxic glop.

All in all, the tar sands cover an area the size of Florida, which is therefore the area proposed for sacrifice by the Alberta government and the oil companies investing $100 billion in the “dirtiest project on earth.”