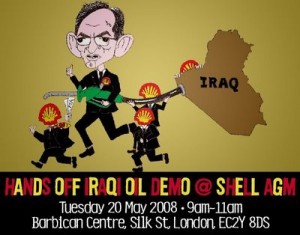 Anyone with time on their hands and a conscience in their heart should head down to Shell’s AGM tomorrow, to join the Corporate Pirates, listen to music from The Carbon Town Crier or comedy from Hands ON Iraqi Oil.

Go and show solidarity with the people of Rossport Ireland, Nigeria, Canada and beyond, who are fighting for their land, ecology, communities and survival, under threat from Shell.

Shell is holding its Annual General Meeting in both Amsterdam and London tomorrow. It has been angling to gain access over long term control on Iraqi reserves ever since the company lost its concessions in the country through the oil industry nationalisations of the 60s and 70s.

Shell is one of five International Oil Companies negotiating Technical Service Agreements with the Iraqi Ministry of Oil for producing fields. These deals represent a foot in the door for companies to be given preferential status for longer term contracts granting the companies reserves for over a generation.

So the oil companies win and the Iraqis lose. If you disagree, then get down and party: The protests will be hold from 9-11 am at the Barbican, Silk Street, London