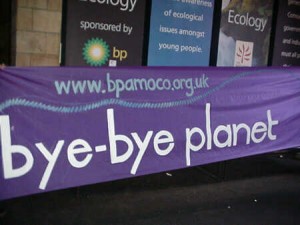 The financial backlash against BP’s investment in tar sands has begun.

A group of American and British shareholders in BP have joined forces to protest over the oil company’s decision to start extracting oil from Canadian tar sands.

Eleven fund managers, which together manage total assets worth more than $10 billion said that BP’s move into tar sands last year was “deeply disappointing” and represented a “disturbing step backwards” for the company.

He said: “Prior to BP’s announcement in December, we had understood that our company would not pursue tar sands development due to the heavy carbon footprint of both the operations and the end product. We fear the implication that BP is retreating from an excellent strategic position designed to exploit the long-term shift away from high-carbon fuel sources and question whether this may undermine BP’s future competitiveness.”

The heavy carbon footprint from tar sands is equivalent to a herd of elephants.