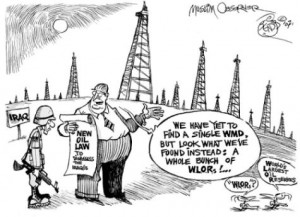 Iraq’s Oil Ministry has approved 35 companies it will allow to bid for soon-to-be announced tenders to develop oil and gas fields.

The largest oil companies in the world — ExxonMobil, Shell, BP, Conoco Phillips, Chevron — all qualified, as did firms of a variety of sizes and nationalities.

The announcement yesterday is a major move that could bring foreign oil companies en masse into Iraq.

The announcement said of the 120 companies or consortia that applied, 35 met the minimum criteria.

These “can then participate in the coming Licensing Round for planned Oil and Gas Fields which will be announced in due time when they will receive a Letter of Invitation from Petroleum Contracts and Licensing Directorate to this effect.”

Those that didn’t qualify this time will be able to update their applications for future bidding rounds.