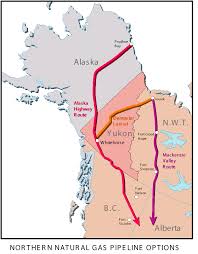 Alaska’s long-held dream of utilizing its vast gas reserves cam a step closer yesterday when BP and ConocoPhillips joined forces to try to break a longstanding political deadlock over the project.

The two energy giants have said that they will spend billions to build a pipeline from the North Slope to feed energy-hungry markets in the United States and Canada. The proposal has won praise from Alaska’s governor, Sarah Palin. “It’s a good day,” she told reporters in Alaska.

BP and Conoco will initially spend $600 million in the next three years to drum up support for the project, seek state and federal approval, and secure gas supplies for the pipeline. BP and Conoco said the project would be the largest-ever private sector construction project in North America.

The project, which would include a $5 billion gas-processing facility on the North Slope, would cost about $30 billion and take at least 10 years to complete.

When the Trans Alaskan Pipeline was built in the seventies, there were repeated stories of cost-cutting, corruption, incompetence and safety failures. Let’s hope things will be different this time. But BP’s record in Alaska does not fill you with confidence. Just ask gadfly, Chuck Hamel.