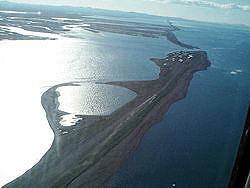 The day before the Exxon Valdez case makes it to the Supreme Court, Exxon is in court again, this time in a federal court in San Francisco. Exxon, BP and seven oil companies are all being sued by a tiny native Alaska village that is eroding into the Arctic Ocean.

The Alaska native village Kivalina, sued the oil companies, as well as 14 power companies and one coal company in a lawsuit that claims that large amounts of greenhouse gases they emit contribute to global warming that threatens the community’s existence.

Kivalina is a traditional Inupiat village of about 390 people about 1,005 kilometres northwest of Anchorage. It’s built on a spit of land between the Chukchi Sea and Kivalina River (see photo).

Sea ice traditionally protected the community, whose economy is based in part on salmon fishing and subsistence hunting of whale, seal, walrus and caribou. But sea ice that forms later and melts sooner because of higher temperatures. “We are seeing accelerated erosion because of the loss of sea ice,” administrator Janet Mitchell said in a statement.

Damage to Kivalina from global warming has been documented in official government reports by the U.S. Army Corps of Engineers and the General Accounting Office, according to the lawsuit, which also accuses some of the defendants of a conspiracy to mislead the public regarding the causes and consequences of global warming.

That wouldn’t be Exxon by any chance would it….