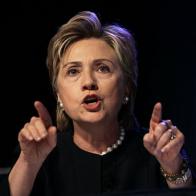 As the world gears up for the Bali Climate Summit in December, last week-end saw three US presidential candidates present plans to combat climate change.

Dennis Kucinich, John Edwards and front runner Hillary Clinton appeared before an audience of about 1,000 as part of the event Global Warming and America’s Energy Future.

Kucinich, the first candidate to speak, cited his vegan lifestyle, small home and fuel-efficient Ford Focus as evidence of his concern for the environment.

The congressman asked the audience to imagine a president not tied to interest groups or carbon-based energy lobbyists in any way, shape or form. Kucinich said he would also fight those influences over legislation and that he would have “no hesitation to go over Congress, right to the American people.”

John Edwards’ plan to combat climate change had four goals: to cut subsidies for carbon industries, to start a new era of innovation and competition by modernizing energy grids, to support innovation with low-interest loans, and to encourage utilities companies to develop and use more efficient energy technology.

Clinton then outlined her “bold, comprehensive plan” to tackle energy dependence and the climate crisis. Her three major goals are to reduce greenhouse gases to 80 percent of 1990 levels by 2050, to cut foreign oil imports by two-thirds by 2030 and to move from a carbon-based economy to a green economy by encouraging innovation. “We cannot afford to fiddle while the world warms,” she said.

Isn’t that what we are doing Hillary??