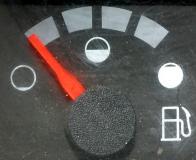 Slowly but surely the unthinkable is becoming thinkable. The days of “peak” are fast approaching, and such is the shortage of new areas coming on stream that there is a “production ceiling” to the amount of oil that can be pumped per day to an ever thirsty world.

Take the Wall Street Journal this morning. “A growing number of oil-industry chieftains are endorsing an idea long deemed fringe: The world is approaching a practical limit to the number of barrels of crude oil that can be pumped every day.

Some predict that, despite the world’s fast-growing thirst for oil, producers could hit that ceiling as soon as 2012. This rough limit — which two senior industry officials recently pegged at about 100 million barrels a day — is well short of global demand projections over the next few decades. Current production is about 85 million barrels a day.

The world certainly won’t run out of oil any time soon. And plenty of energy experts expect sky-high prices to hasten the development of alternative fuels and improve energy efficiency. But evidence is mounting that crude-oil production may plateau before those innovations arrive on a large scale. That could set the stage for a period marked by energy shortages, high prices and bare-knuckled competition for fuel.”

The Journal finishes by quoting former Saudi Aramco executive, Sadad Ibrahim Al Husseini, saying “Saudi Arabia will pull us out of this mess. Saudi Arabia is doing all it can,” he says in an interview. “But what it is doing, in the long run, won’t be enough.”

So what is Saudi Arabia doing? Its on a PR drive to convince journalists that it has enough oil. You should read the article by Tim Webb in yesterday’s Observer, who was taken on tour of Shaybah on the edge of the aptly named Rub’ al-Khali (’empty quarter’), the location to one of the country’s largest reserves, with hundreds of other journalists. The Saudis wer trying to show the world that they have enough oil.

“Yet”, notices Webb “in the heart of the empty quarter to the south, Shell and other oil majors are searching in vain for new deposits. The Saudis opened up the region to overseas exploration in the 1990s when oil prices were barely in double figures. The empty quarter was hailed as one of the few big opportunities for the majors to get a foothold on the world’s largest oil producer. Yet so far the appraisal wells have come up dry. No journalists were flown out to visit this particular area last week.

Webb quotes Samuel Ciszuk, an analyst from Global Insight “Whether that’s a sign the Saudis don’t have as much oil as they say they do, we just don’t know. Saudi Arabia is desperate to say they have things under control.”