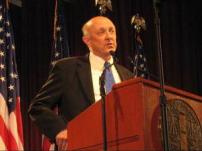 Former CIA Director, James Woolsey has told a biofuels conference that it is in the U.S.’s national security interest to continue developing transportation fuel derived from agricultural products because the country has become dangerously dependent on foreign oil.

Woolsey said the US needs to significantly reduce its reliance on foreign oil. “The people who produce large amounts (of oil) have a lot of leverage that we don’t want them to have,” he said.

Woolsey, who drives his own hybrid, said the fact that so much of the oil used by U.S. consumers comes from the Middle East gives some nations in that volatile region an inordinate amount of power.

That’s why you invade them James….