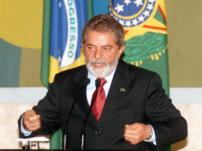 Brazilian President Luiz Ignacio Lula da Silva has urged African countries to take up the use of biofuels as a way of improving their economic independence. He is starting a four-nation tour of Africa, offering help from Brazil in developing biofuel technology.

This is the latest stage in an intensive global effort by President Lula to promote the use of biofuels which have powered Brazilian vehicles for 30 years.

Speaking in Burkina Faso, he said that a time when Africa was once again taking the path of economic growth ethanol and biodiesel could provide a way to guarantee the continent’s energy autonomy and economic sovereignty.

However, some environmental groups in Brazil fear the rapid expansion of sugar cane plantations to grow ethanol could threaten sensitive ecosystems such as the Brazilian Savannah and indirectly the Amazon as cattle are displaced from other regions.