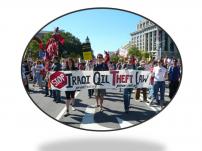 Its a very busy fall for us here at Oil Change International. As our concern over both the war and global warming is growing, we’re putting a lot of effort into manifesting that concern into protest.

The connection between protest and change is real, and important to understand. In a recent academic study (pdf) of the subject, Jon Agnone of the University of Washington confirms what activists at the grassroots have learned by experience. Namely that:

• The level of protest is the most significant factor that can be statistically linked to passage of environmental legislation.

The lesson is clear. To avoid changing the Earth’s climate, and to stop this war for oil, we need to change the political climate inside the Beltway. In the absence of protest, and the organizing that makes it possible, there will be no policy fix to the problem of global warming. And despite the best efforts of our friend and Board Member Tom Matzzie, we do not believe lobbyists alone can stop this war.