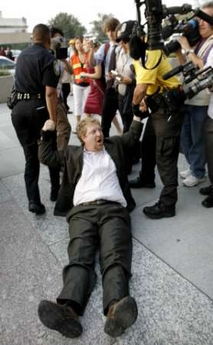 For the first time in 16 years, a major environmental conference has opened in Washington, hosted by the Bush administration. But no concrete results are expected, and that – say European participants – is the point of this high-level meeting.

UPDATE: 50 Activists were arrested at a protest in front of the State Department on Thursday morning, including Oil Change International’s Steve Kretzmann (pictured at left) and Jen Kalafut. The demonstrators blocked access to the State Department where Bush’s “Major Emitters” conference was being held, while holding a banner and placards that read: Bush: Wrong Way on Global Warming.

Far from representing a Damascene conversion on climate change by President George Bush, the two-day gathering of the world’s biggest polluting nations is aimed at undermining the UN’s efforts to tackle global warming, say European sources. “The conference was called at very short notice,” said one participant. “It’s a cynical exercise in destabilising the UN process.”

Bush’s real motive, participants say, is to blunt attempts by Democratic presidential candidates to attack the White House for blocking climate-change initiatives. He also wants to head off the gathering momentum in Congress to impose the first ever mandatory limitations on emissions for US companies.

The fear among European delegates is that the US will try to string out the talks to “run down the clock” on the Kyoto process and prevent agreement being reached that way.

It is “a sidelight, not a process that leads to anything,” said Philip Clapp of the National Environmental Trust. “You’re seeing the Bush administration make this up as they go along.” But their heads are still firmly stuck in the sand. 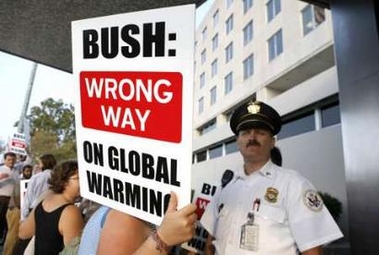 “Bush and others in this meeting are talking about climate change while their money keeps walking the wrong way to fossil fuels” said Steve Kretzmann of Oil Change International. “Talk is cheap, and our energy funding needs to take a u turn for the climate now”. The Stern Review on the Economics of Climate Change called global oil, gas and coal subsidies of roughly $250 billion annually “the most obvious” of the “many policies that distort the market” in favor of fossil fuels.