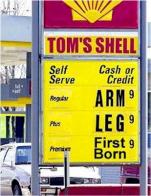 As oil prices hit another record, breaching the $81 a barrel mark for the first time, there is yet another warning that the oil price is likely to hit US$100 a barrel by the end of next year.

This is due to soaring rates of domestic oil consumption in the world’s leading oil producing nations will cut into their export capacity, according to the chief economist at CIBC World Markets.

Speaking at the 6th Annual Association for the Study of Peak Oil & Gas conference in Cork, Ireland, CIBC World Markets chief economist, Jeff Rubin told delegates that the export capacity of OPEC, Russia and Mexico will drop by 2.5 million barrels per day by the end of the decade.

“Domestic demand growth of as much as five per cent per year in key oil producing countries is already beginning to cannibalize exports and will increasingly do so in the future as production plateaus or declines in many of these countries,” says Mr. Rubin. “OPEC members together with independent producers Russia and Mexico consume over 12 million barrels per day, surpassing Western Europe to become the second largest oil market in the world.

“At current rates of domestic consumption the future export capacity of OPEC, Russia and Mexico must be increasingly called into question. These trends are likely to result in a sharp escalation in world oil prices over the next few years.”