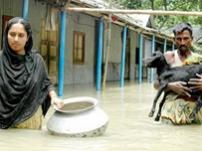 Almost 150 people have died and almost 20 million people have been displaced or marooned in severe flooding across India, Bangladesh and Nepal. In some areas, the floods are being called the worst in living memory.

A vast area is under water, damaging farmland and affecting thousands of villages. Aid agencies say stocks of food and water are running very low. Many of the rivers which flow through northern India and into Bangladesh are overflowing, and in some places they have burst their banks.

Some 12 million have been displaced or marooned in India; 5.5 million displaced in Bangladesh and over 750,000 affected in Nepal. In Assam, in north-eastern India, three feet of rain fell in July.

Is this the Monsoon or is this climate change?