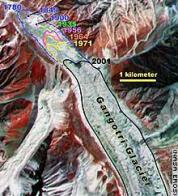 Yesterday the Independent highlighted how rising sea-level rise is causing catastrophe in the South Pacific, and today the New York Times reports of melting Himalayan glaciers, which “points to a looming worldwide concern, with particularly serious repercussions for India and its neighbors”.

The paper reports: “The thousands of glaciers studded across 1,500 miles of the Himalayas make up the savings account of South Asia’s water supply, feeding more than a dozen major rivers and sustaining a billion people downstream. Their apparent retreat threatens to bear heavily on everything from the region’s drinking water supply to agricultural production to disease and floods.

A recent study by the Indian Space Research Organization, using satellite imaging to gauge the changes to 466 glaciers, has found more than a 20 percent reduction in size from 1962 to 2001, with bigger glaciers breaking into smaller pieces, each one retreating faster than its parent. A separate study found the Parbati glacier, one of the largest in the area, to be retreating by 170 feet a year during the 1990s.

Think of the glacier as a bank account, says Dobhal. It total volume is “how much we have in the bank,” and so the glacial meltwater is like a dividend being released for everyday use.

But what happens when the bank account is empty?