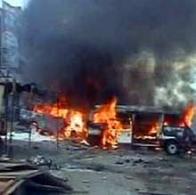 Something of a Middle East / Iraq feel to the blog today. First the ongoing violence. Insurgents have launched three attacks in and around the disputed oil hub of Kirkuk in northern Iraq today, killing two people and wounding several others, according to news reports.

In one attack, militants detonated a roadside bomb near an Iraqi patrol in charge of protecting local oil infrastructure, killing one soldier and injuring another three, including an officer, an Iraqi army official said.

Another roadside bomb targeting a police patrol inside the city itself killed one civilian and seriously wounded three policemen.