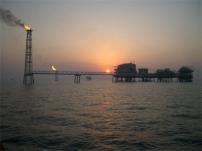 Just as the debate rages of Iraq’s oil law, new government figures show that Britain is now importing only the tiniest fraction of its oil from the Middle East, sourcing its crude instead from the Americas, Africa and Norway.

An analysis by UK government officials reveals how dramatically the map of UK oil sources has changed over the past half-century, with almost three-quarters of UK oil coming produced from Norway.

The UK will also have to start looking elsewhere as North Sea reserves continue to decline. Oil and gas companies are forecast to invest up to £1.5bn less in North Sea exploration this year despite the expected surge in Britain’s energy needs.

Although North Sea oil and gas fields still have plenty of reserves – about 25bn barrels of oil equivalent (boe) – it is becoming more expensive to extract it. British North Sea production peaked back in 1999.