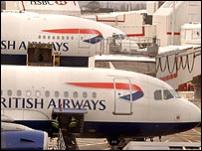 For months there have been consistent rumours of a concerted air industry fight back over climate change, especially in the UK, where airlines and climate has become the latest environmental battle-ground. A new front group, Flying Matters, has been formed with backing from most of the major airlines.

Now, the British Airline Pilots’ Association (Balpa) is hitting out too. It says “half truths and untruths” have made passengers feel guilty about taking a flight. Air transport is being used as a “scapegoat” for climate change it argues.

“Our report clearly shows that technological advances now being researched will cut aircraft emissions still further,” he said. “It would be inappropriate and premature to restrict air transport at this time. The damage that would be done not only to our industry but to tourism and to the economies of developing nations would be enormous.”

He said the industry would play its part in addressing carbon dioxide emissions and that air travel had become “an easy target”.