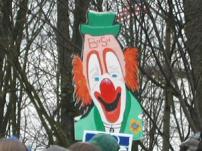 Twenty four hours after saying he could get a deal on climate, cold political reality has caught up with Tony Blair as George Bush rejected any binding targets for reducing greenhouse gases.

Mr Blair and Angela Merkel, the German Chancellor, want the G8 to agree that world temperatures should rise by no more than two degrees celcius, requiring a 50 per cent cut in carbon dioxide emissions by 2050.

Mr Blair, frequently accused of failing to capitalise on his closeness to Washington, would have seen this deal as the perfect answer to his critics. But the Bush administration publicly rejected it.

“At this point in time we are not prepared to adopt that proposal,” said James Connaughton, head of the White House Council on Environmental Policy and one of the president’s key advisers. America wants China and India to be part of any global deal on climate change.

Thousands of protesters, many dressed as clowns, continue to surround the Summit.

Guess who is the biggest joker of them all George?