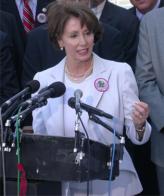 US House of Representatives Speaker Nancy Pelosi has urged President George Bush to compromise with other G8 countries to fight climate change at the G8 summit next week.

Pelosi and a bipartisan delegation of congressional leaders have just visited Greenland on a visit to see the effects of climate change at first hand. “There is just no denying it” said Pelosi, “We saw the impact on the local people there, on their hunting, their fishing, their economic survival. And it wasn’t caused by the people in Greenland. It was caused by the behaviour in the rest of the world.”

The biggest culprit is of course the US. But it has given no sign it is open to compromise at the G8 meeting. Moreover, it is actually still trying to undermine efforts on climate. It wants key targets and timetables for combating global warming – including a pledge to halve emissions by 2050 – removed from a draft summit communique.