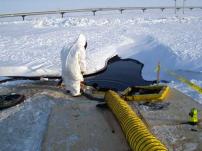 Can nothing go right for BP? Yesterday the company said it will shut down production of 100,000 barrels of Alaskan oil for a few days, after discovering yet another leaky pipe at a processing facility.

Some 400,000 barrels of oil a day are pumped at Prudhoe Bay, and BP has a 25 percent stake in the field. The company said its production loss would be 25,000 barrels per day. “We’re putting together inspection and repair plans to return the facility to normal operations,” BP spokesman Neil Chapman in Houston said.

Analysts said the temporary loss of output at the Prudhoe Bay, Alaska, oil field should not have a dramatic impact on world oil markets, but with supplies already tight and crude futures trading near $66 a barrel, any snag will make the markets even more jittery than normal, especially given ongoing problems in Nigeria.