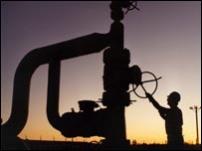 US. energy officials are predicting that worldwide demand for oil will continue to grow, but at a slower rate after 2015. Also over the next quarter century oil prices will climb as high as $95 a barrel.

By 2030, the share of worldwide energy that comes from oil and refined products will decline to 34 percent, down from 38 percent in 2004, the Energy Information Administration said in its annual international outlook.

The Energy Department report, which assumes no changes will be made to energy policies and regulations, estimated global energy demand – for oil, natural gas, coal, nuclear and renewables – will rise by 57 percent over the next 25 years.

Over that same period, coal’s share of world energy demand will rise to 28 percent, up from 26 percent in 2004 – rising faster than any other energy source, at 2.2 percent annually, the federal agency said.