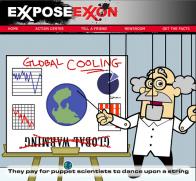 New analysis of the latest ExxonMobil funding reports reveals that in spite of recent public statements to the contrary, the company continues to bankroll organizations that misrepresent the science and urgency of global warming.

“Exxon’s decade-long campaign of denial and deception on global warming has provided cover for the Bush Administration’s inept climate policy,” said Kert Davies, Research Director at Greenpeace “Although Exxon’s public rhetoric on global warming appears to be shifting, in reality they continue to fund the denial industry.”

Greenpeace’s analysis shows that Exxon continues to fund the core network of front groups that have been misrepresenting the science on global warming and attacking the Intergovernmental Panel on Climate Change since the early 1990s. Among the recipients of Exxon funding in 2006 are several organizations which have been at the center of Exxon’s tobacco-style disinformation campaign.

“The only way for ExxonMobil to be taken seriously at the policy table is to halt the flow of cash to these groups and to denounce their work,” said Exxpose Exxon campaign director Shawnee Hoover. “Without a deliberate policy change in this area, the company is continuing with the same old strategy: double-crossing America on global warming.”