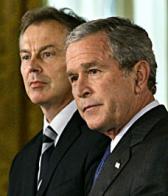 He may be on borrowed time as a Prime Minister, and about to undertake his last visit to the US, but The Guardian reports today how “Tony Blair believes he is close to persuading George Bush to accept an ambitious plan to bring the world’s greatest polluters into international partnership to fight climate change for the first time”.

The plan is said to involve setting up a network of carbon trading schemes and is one of five main proposals drawn up by the Germans and British ahead of the G8 summit next month.

Blair is said to want an agreement before President Bush leaves the White House. The famous duo are due to hold talks tomorrow at the White House during Blair’s last official visit to Washington.

A Downing Street source told The Guardian: “There won’t be binding targets on China and India but we’ll need them to take some of the effort as part of everybody doing more.” But the source warned that the US position was “fluid”.

Hmmm, I would describe Bush’s stance on climate as rigid rather than fluid, but who knows. Pigs might eventually fly.