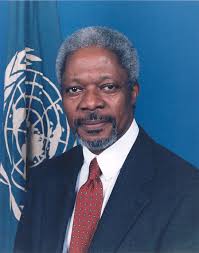 UN Secretary General Kofi Annan has unleashed a thinly veiled attack on President Bush, his Administration and the Australian government for showing a “frightening lack of leadership” that is hindering the fight against global warming.

Speaking at the start of the main session of the UN climate change conference In Nairobi, Annan described the build-up of heat-trapping greenhouse gases as an “all-encompassing threat” to the world.

Another comment was seen as directly criticising Bush, when Annan called on leaders to stop being “economically defensive”. “[They] must show courage and know that if they do, the people and the voters will be with them.”

But few expect the US, represented in Nairobi by Paula Dobriansky, under-secretary for global affairs, to change its stance.

That is one job the new Congress in January has to do. The world cannot wait for Bush to leave office, before the US acts..