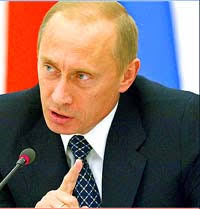 President Vladimir Putin has denied that Russia is acting like a superpower by throwing its weight around to control prices and supplies of oil and gas to countries like Ukraine. “We’re not behaving like an energy superpower,” he said yesterday at the Russian-organised Valdai Club. “We just want negotiations that are fair. We don’t need superpower status.”

Putin said that Russia was a reliable and stable supplier and had “always behaved responsibly and intend to continue doing so.” The world,” he said, “has an interest in stability of supplies and in the development of a stable Russia. That’s our goal, too, and reflects our own interests as well.” I wonder if the residents of Ukraine, who had their gas supplies cut last winter would agree with him

At the same time, Putin said Russia would resist European attempts to force Russia to exploit its oil and gas reserves for the benefit of the West. He said that Russia was determined to tap into its energy potential for its own development, rather than western interests.

It could be interesting to see what happens this winter if gas supplies get short in Europe. Will Putin come to the rescue? Let’s wait and see.