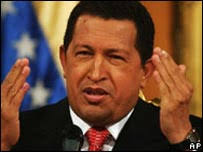 BP’s woes continue. Hurricanes, explosions, spills, price-fixing and now a production short-fall. BP admitted yesterday that it produced less oil in the past three months than many analysts had predicted, leading some suggesting it could miss its crucial production targets for the year.

The company has blamed Venezuelan President Hugo Cavez for the shortfall at the same time as Chavez is demanding that BP give up even more of the oil produced from the country.

BP has so far had to renegotiate contracts on three fields in the country, giving about two-thirds of the oil the fields were producing to the state-owned oil company Petroleos de Venezuela.

Now a fourth, and said to be lucrative contract is also under renegotiation. The field, Cerro Negro, is 83 per cent-owned by Exxon Mobil and PDVSA, but BP still gets an estimated 35,000 barrels per day for its 17 per cent interest, making it its largest single interest in Venezuela.

BP also admitted it had set aside an extra $500m to cover legal bills over the Texas refinery blast that killed 15 people last year, but made no mention of the criminal investigation it faces into propane trading.

For how much longer will the head of BP Sir John Browne be seen as Britain’s most respected businessman?