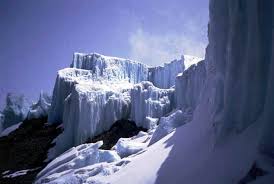 Mountain glaciers are melting faster now than at any time in the past 5,000 years because of climate change, a new study has found. From the Andes to the Himalayas climate change is leading to a full-scale retreat of the world’s tropical glaciers, meaning that we might have passed the critical threshold which could see most of the highest ice caps disappearing within the near future.

This is bad news on two fronts: Melting glaciers in South America and Asia not only contribute to rising sea levels, but they are also vital sources of freshwater for millions of people.

Lonnie Thompson of Ohio State University and his team of scientists writing in the Proceedings of the National Academy of Science, present three lines of evidence pointing to a dramatic melting of glaciers: a change in the chemical isotopes of the ice cores, the widespread retreat of glaciers and the uncovering of frozen plants that had been buried for thousands of years.

This is yet another warning that millions of people will be displaced due to rising sea-levels and water shortages. Meanwhile all the politicians do is talk…