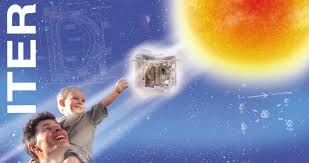 A €10bn (£7bn) project, called Iter, to build a prototype nuclear fusion reactor will be signed off in Brussels by the EU, Japan, China, South Korea, India and the US today. Its proponents argue that prospect of virtually limitless energy is no longer science fiction. Advocates argue that nuclear fusion is the most promising long-term solution to the energy crisis, offering the possibility of abundant power from cheap fuel with no greenhouse gases and low levels of radioactive waste.

But critics of the project say the British government is wasting vast sums of money – 44% of the UK’s research and development budget for energy – on a scheme that does not guarantee ever producing useful energy. They argue that investment in renewable energy would be better.

Remember the nuclear promise of energy too cheap to meter. It remains just that, a promise.