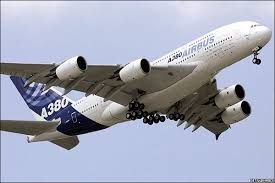 To its supporters its shear size is something special, for the Airbus 380 that landed for the first time at London’s Heathrow yesterday is enormous. Its wing span is bigger than a football pitch – it weighs 150 tonnes and can carry some 840 passengers, that’s over 400 more than a 747.

To its critics this vast plane signifies another step closer to climate catastrophe. The plane can fly more of us, further, so encouraging more of us to fly at a time when less of us should be flying. It may be more economical per passenger if full, but by the time bars, shops and beauty salons have been added, it may not be. Most airlines are said to favour only 480 passengers – the rest of the space will make planes like flying cruise liners.

The aircraft is so big that Heathrow runway had to be strengthened – there were loads of visiting dignitaries there including UK chancellor Gordon Brown. How do you reconcile this one Gordon? For a man who just said that climate change is one of the most pressing issues of our time to say that the plane is “Europe at its best” is something of a contradiction in terms.