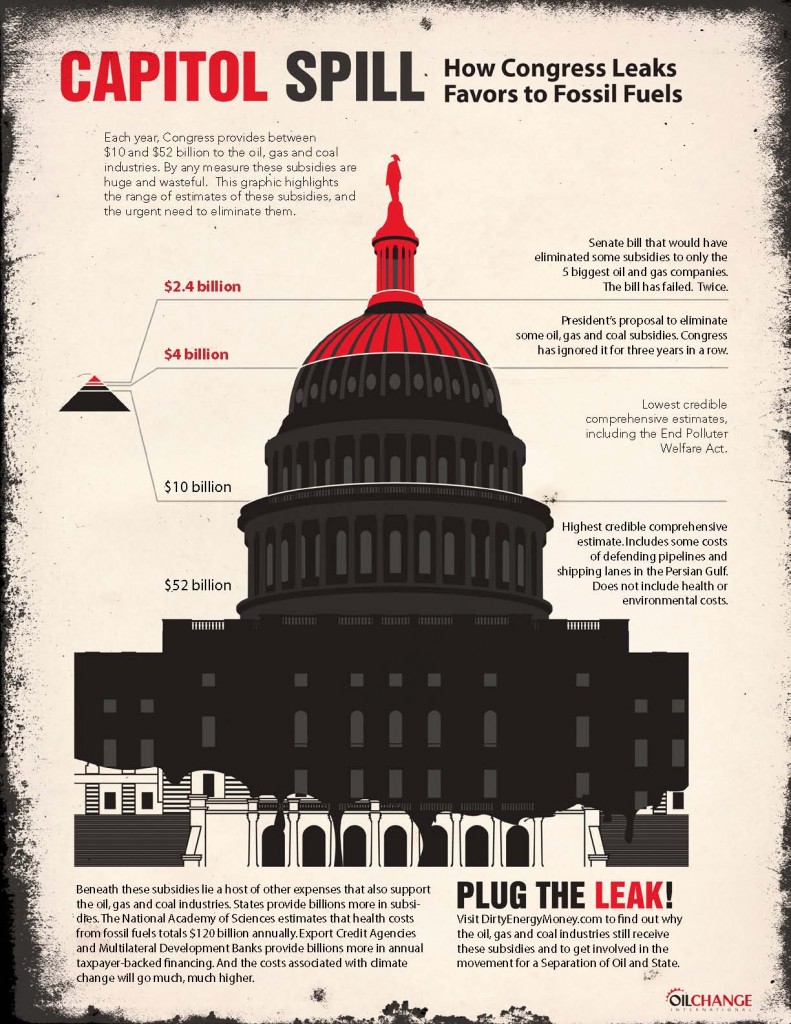 Working with partners and communities around the United States, we are pushing for an end to our government subsidizing the fossil fuel companies who are fueling global warming and polluting our democracy.

In the United States, credible estimates of annual fossil fuel subsidies range from $10 billion to $52 billion annually, far greater than any support for renewable energies. This at a time when Congress is slashing budgets for important social programs.

A fossil fuel subsidy is any government action that lowers the cost of fossil fuel energy production, raises the price received by energy producers or lowers the price paid by energy consumers. There are a lot of activities under this simple definition—tax breaks and giveaways, but also loans at favorable rates, price controls, purchase requirements and a whole lot of other things.

There have been a number of legislative attempts to remove these subsidies, but as of yet none have been successful. The Repeal Big Oil Tax Subsidies Act, sponsored by Senator Menendez (D-NJ) was debated and defeated by the Senate for two years running, and would have eliminated $2.4 billion in annual tax deductions for the five major oil companies: BP, Exxon, Chevron, Shell and ConocoPhillips.

President Obama has proposed cutting fossil fuel subsidies every year he’s been in office. The projections for savings have varied slightly each year but always hover around $4 billion annually.  But Congress has never even proposed voting on all of them. Most recently, Senator Bernie Sanders and Representative Keith Ellison introduced the “End Polluter Welfare Act”, which would eliminate $11.3 billion fossil fuel subsidies annually.  This bill has also not been voted on.

Challenges
The fossil fuel industry is one of the most powerful lobbies in the United States, if not the world.  And they are peddling their influence both through lobbying on the Hill and by lining the campaign coffers of our representatives.  Recent analysis by Oil Change International using our Dirty Energy Money database has shown that the current Congress is set to be the dirtiest Congress in history. In the current cycle (since January 2011) dirty energy companies have spent at least $43.5 million on influencing federal elections in America.  And there’s good reason the fossil fuel industry spends this money – they get a tremendous return on investment, on the order of 5800% based on recent estimates.  This comes by way of the enormous fossil fuel subsidies they receive each year.

Without a separation of oil and state and a huge outcry from citizens around the country, the fossil fuel industry will continue distorting our politics and policies, and reap the grand rewards.  All the while, our greenhouse gas emissions will rise, and communities will continue to be torn apart by mining, fracking, oil spills, and all the other ills that the industry brings.

Solutions
We are working with partners such as 350.org and others to expose the true costs of fossil fuels on American citizens.  These costs range from pain at the pump to increased food prices due to the impacts of global warming.  We’re galvanizing a growing movement calling on an end to these wasteful handouts to the richest companies in the world, generating support for plans and proposals to shift these subsidies away from rich dirty energy companies.  And at the same time, we’re exposing the dirty influence of these companies on our politics through our Dirty Energy Money campaign.

Resources
To find out more about U.S. fossil fuel subsidies, check out these great resources: