Oil Change International is excited to announce a new online tool that tracks campaign contributions given to Pennsylvania’s Senators and Representatives by fossil fuel industry interests. All data in this analysis can be found in our new State Dirty Energy Money tool: states.dirtyenergymoney.com.

In recent years, the oil and gas industry has been on the march in Pennsylvania. Home of the Marcellus Shale formation and a historically productive coal state, Pennsylvania is a true battleground in the expansion of the fossil fuel industry.

Analysis by Oil Change International shows that, since 2006, the fossil fuel industry has provided over $4.4 million in direct campaign contributions to members of the Pennsylvania General Assembly. In that time, overall contributions have doubled, from roughly $800,000 during the 2006 cycle, to over $1.6 million in total giving during the 2012 election cycle. As you can see in the graph below, there is a large partisan split in contributions and it’s currently increasing. 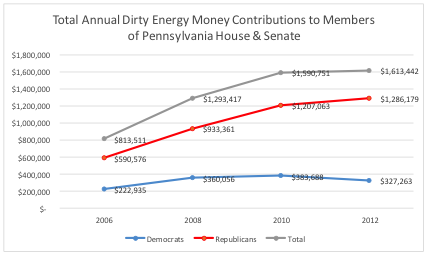 The oil and gas sector, in particular, has seen a marked and steady increase in political spending in recent years, more than doubling between 2006 and 2012. At the same time, Pennsylvania has seen a boom in natural gas production thanks to the controversial practice of hydraulic fracturing (“fracking”). 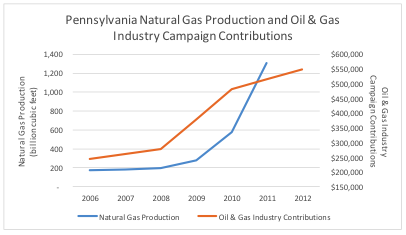 There are a number of key industry players in the fracking boom in Pennsylvania, and the new data shows that these players are as active in their campaign contributions as they are in their drilling. Strikingly, these companies have gone from nearly zero contributions to members of the Pennsylvania House and Senate prior to the current gas boom, to becoming some of the largest donors in the state. At the same time, these companies have been cited and fined millions of dollars for violating Pennsylvania state environmental regulations. 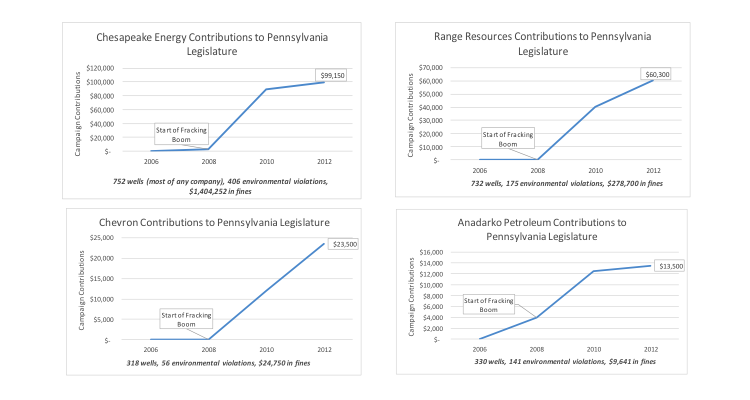 More details on dirty energy money in Pennsylvania include:

Senate Bill 259 was a massive legislative win for the fracking industry. The bill, introduced by Senator Gene Yaw (R) (who has received $41,650 in money from the oil and gas industry since 2006) passed unanimously in the Senate and by a vote of 167-33 in the House. The bill guts decades-old law that helped protect landowners from predatory oil and gas lease practices.

Analysis of the vote shows how successful the oil and gas industry’s investments in the Pennsylvania legislature have been. Senators and Representatives voting in favor of this bill have accepted a total of $4,137,533 in dirty energy money contributions since 2006. On average, each member of the Assembly and Senate that voted in favor of fossil interests received 5x more than those who voted against.

PRESS RELEASE: Click here for a press release on the above analysis.