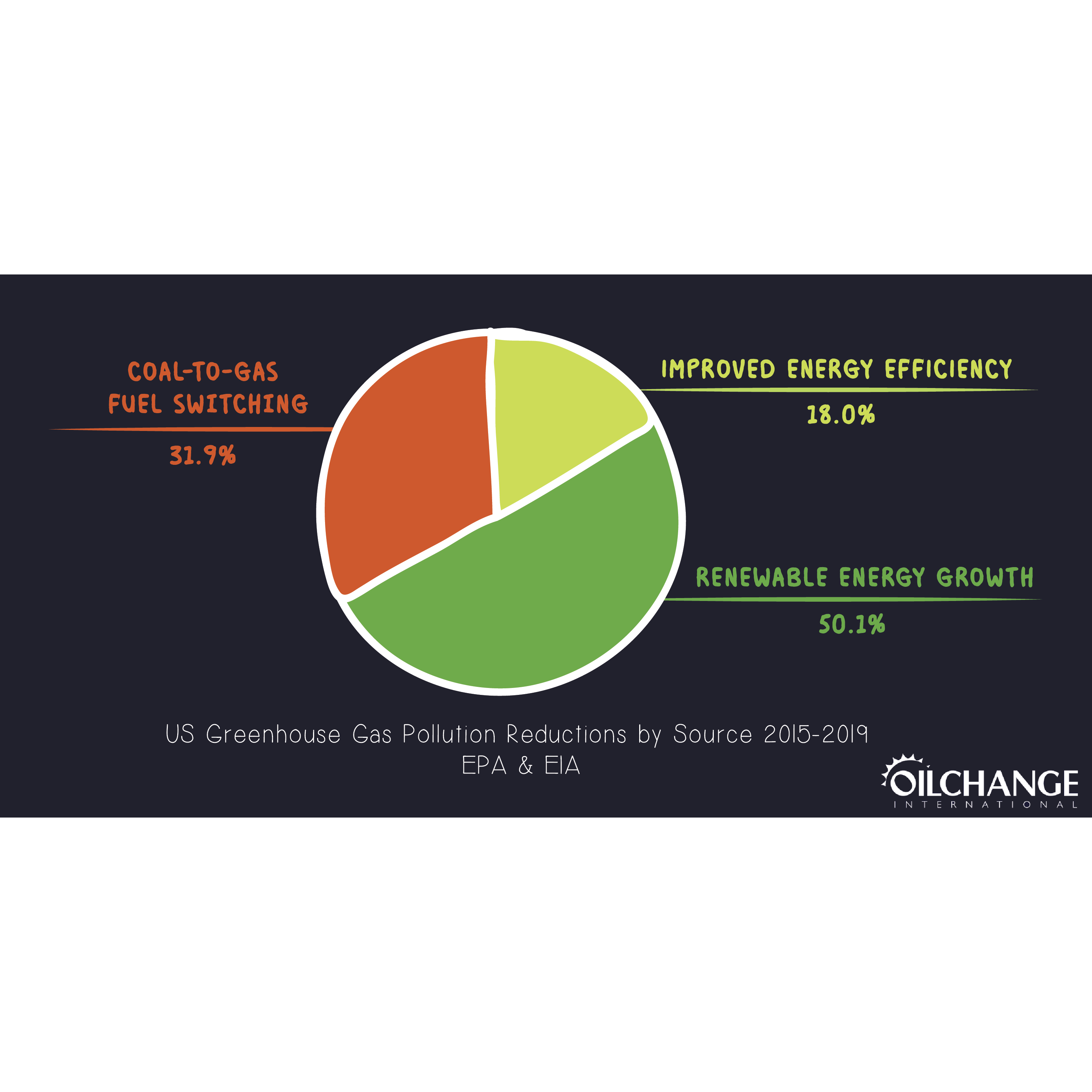 Last month, we dug into many of the ways the American Petroleum Institute (API) uses bad data to deceive policymakers and the public about its position on climate action, especially the regulation of methane pollution. In reality, API’s position hasn’t fundamentally changed in a decade. It speaks more to inaction than aggressive emissions reductions.

That’s not the end of API’s misleading claims. During the same years it has been fighting methane regulation, API simultaneously claims (as exemplified in this recent Tweet) that an increasing reliance on gas for electricity production was the “No. 1 reason” U.S. power sector carbon dioxide pollution declined.

Because, once again, API seeks to obscure the significant contribution of methane pollution. As described below, once we factor in methane emitted by the oil and gas industry, and consider savings from improved energy efficiency, increased use of gas offers at best a minor benefit, and probably a net source of emissions. The rapid growth of renewable energy makes the biggest contribution to pollution savings. Increased energy efficiency matters, too.

EIA estimated how much carbon dioxide pollution was prevented through two actions: 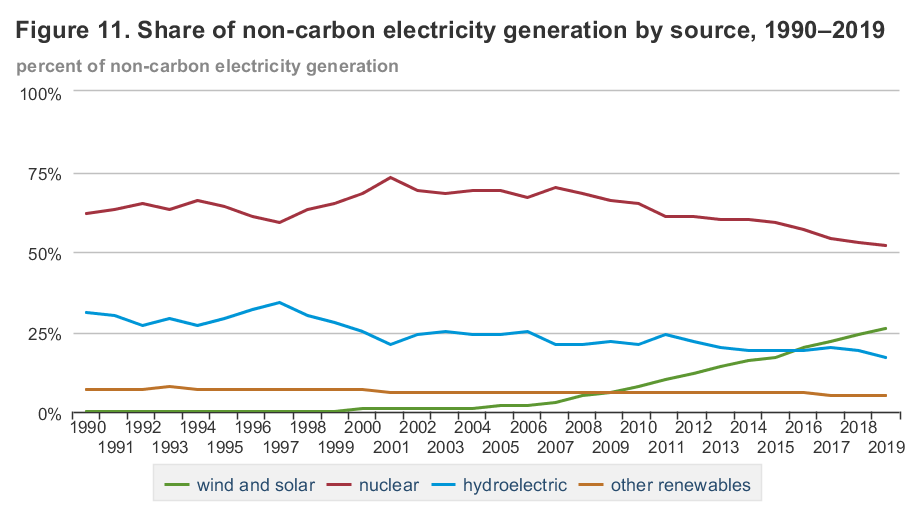 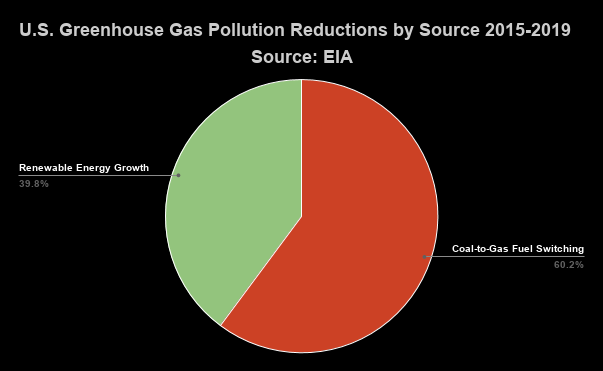 Trouble is, that’s not the full picture.

Extracting, transporting and processing gas for electricity generation creates a lot of methane pollution. Coal mining and burning doesn’t (though coal mining also produces methane and is by no means a clean substitute for gas). Fossil gas is mostly methane, while coal is not. When the oil and gas industry drills for and processes gas (either alone or alongside oil), a lot of methane is intentionally burned (flared) or released into the atmosphere (vented), or unintentionally escapes (leaks).

Of course, not all the oil and gas industry’s methane pollution applies to electricity production. Fossil gas has many end uses. This includes heating homes and powering industrial processes. To get a more accurate picture, we need to calculate the fraction of gas production that power plants consume each year. Fortunately, the EIA reports that data for 2015 onward. It works out to 33-38% depending on the year.  So, of that 203 million metric tons generated by the oil and gas industry in 2019, about 68 million metric tons (33%) directly relates to gas power plant consumption. Thus far, things still look pretty good for fuel switching. For the 2015-2019 period, its net savings shrinks to a 56% share. 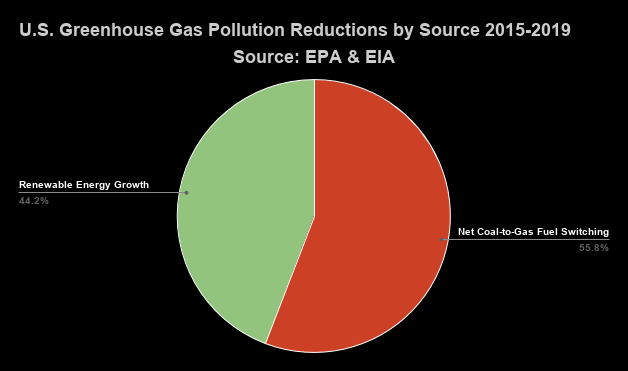 But that’s not all.

Methane packs a bigger punch to our climate than carbon dioxide. As noted in last month’s post, it amounts to “over 80 times worse for the climate in the near-term”. You wouldn’t know that from EPA’s analysis, though. EPA uses an outdated factor (25), also known as Global Warming Potential (GWP), to calculate methane’s climate impact compared to carbon dioxide’s. Carbon dioxide has a value of 1, meaning methane is 25 times more damaging, over the same period of time, as carbon dioxide.

However, EPA’s number comes from the Intergovernmental Panel on Climate Change’s (IPCC’s) 4th Assessment Report (AR4) published in 2007. That same factor in the 5th and most recent Assessment Report (AR5), is as high as 36. This higher value reflects an updated scientific understanding of methane’s impact. EPA also uses methane’s 100-year GWP. But methane is a relatively short-lived climate pollutant, with an average lifetime in the atmosphere of less than 2 decades. As the IPCC report itself says, “There is no scientific argument for selecting 100 years compared with other choices”. A 20-year GWP for methane also exists in AR5, with a value as high as 87.

Recalculating the oil and gas industry’s methane pollution using the 20-year, AR5 value of 87 more than doubles its climate damage. For example, for 2019, that 68 million metric ton value becomes about 236 million metric tons carbon-dioxide equivalent. Putting it all together, the net savings from fuel switching in 2019 falls from API’s cited value of 523 million to just 289 million. That’s a little over half the initially reported savings. By contrast, in the same year, solar and wind growth avoided 330 million metric tons, more than fuel switching. For 2015-2019, this takes fuel switching’s savings down to 40% of the total. 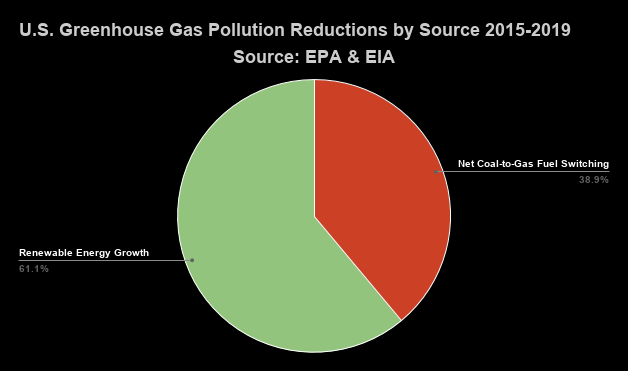 While API perhaps grudgingly cites the impact of wind and solar in cutting climate pollution, they leave out the role of energy efficiency. Improving the efficiency of the energy sector also helps to cut pollution. We accomplish the same amount of work with less electricity. Fortunately, EIA doesn’t ignore this point. In the same report referenced earlier, Figure 3, and similar figures in previous year’s editions, include information on the energy-related carbon dioxide pollution impact from changes in energy intensity.

Adding It All Up

Since API makes its claim not just for 2019, but for as far back as 2007, we also combined multiple years of data to see if fuel switching did any better. The available data for all factors described above exist for 2015 through 2019. Comparing the savings from fuel switching, solar and wind growth, energy efficiency gains, and subtracting out the methane pollution attributable to gas-based electricity generation, fuel switching still isn’t the “#1 reason” that API claims. As shown in the chart below, it contributed only 32% of the savings during that time. Wind and solar alone supplied half. Energy efficiency added another 18%, for a combined “green” savings of 68%. And based on the more limited data available before 2015, it appears unlikely that fuel switching would fare much better in a similar analysis.

If that weren’t enough, fuel switching’s savings may disappear altogether.

As Lorne and Andy noted in their post, EPA’s emissions inventory is widely thought to under count methane pollution. As shown in their chart, reproduced below, estimates from other credible sources, including the International Energy Agency (IEA) and Environmental Defense Fund (EDF), arrive at much higher estimates. The widely cited study by Alvarez et al attributes this underestimate, at least in 2015, to infrequent-but-high-pollution “abnormal operating conditions”. The study estimated methane emissions from the U.S. oil and gas supply chain at 60% higher than what EPA reported for that year. That’s similar in scale to what IEA reports for 2019 in the chart below. EDF, meanwhile, estimates 2019 emissions at about double what EPA reports. 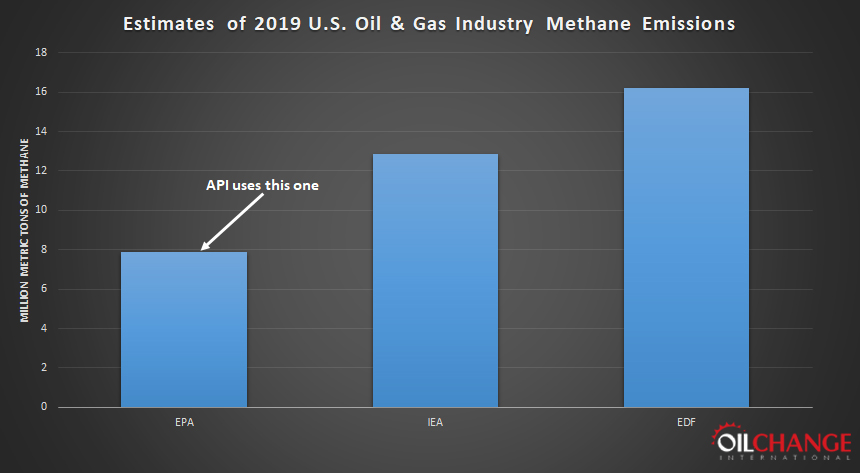 EDF has fortunately calculated estimates for 2015, 2017, 2018 and 2019. Substituting their values into our earlier calculations for these years, and keeping everything else the same, methane pollution from the oil & gas industry wipes out the savings from fuel switching. Solar and wind’s growth, and energy efficiency gains, contribute 100% of energy sector savings. Not only is fuel switching not #1, it doesn’t even rank.

Thus, whether using the most cautious estimate, which may under count emissions, or the highest recent, robust estimate, API’s repetition of fuel switching savings just don’t add up. Fuel switching occupies a space somewhere between minor player and net contributor to emissions.

Our analysis leaves out a few considerations for simplicity and data availability. On balance, these likely don’t change the overall conclusions, but they’re worth noting.

First, as noted earlier, coal mining, processing and transportation, and abandoned coal mines, produce some methane. Ideally, the calculations above would account for the methane that was not produced for the fraction of coal-based electricity generation that did not occur, and that was effectively replaced by gas-based electricity generation. This would increase the emissions savings from fuel switching. Or, put another way, it would decrease the oil and gas industry’s net methane pollution. However, since the oil and gas industry is much more methane-intensive than the coal industry, we assume this exclusion has a small impact.