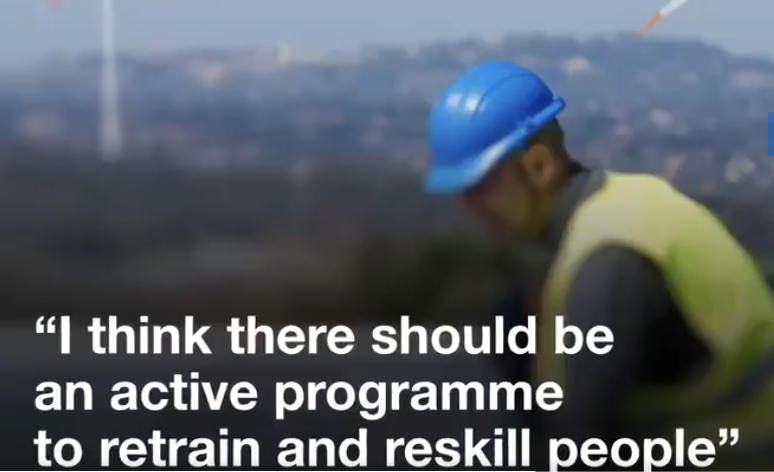 We know the oil industry is in trouble, due to the drastic oil demand reduction driven by the pandemic, and competition with cheaper renewables.

And although the industry is in deep financial trouble, it still wants us to believe we should trust industry to steward in the renewable revolution.

Bernard Looney, BP’s CEO, said in an interview last month that “what the world wants from energy is changing, and so we need to change, quite frankly, what we offer the world.”

These are hollow words from a company that essentially said the same thing twenty years ago, when BP said it was going “Beyond Petroleum.” It was cynical spin then. It is still empty spin now.

First, we know that from last week’s ground-breaking research by OCI: None of the Big Oil companies’ plans come anywhere near reaching the UN Paris climate goals.

And despite the hype, Big Oil’s dirty tactics die hard. We have known for years the oil industry has copied the tactics of the tobacco industry. But now they are using the same lawyers to defend themselves to lawsuits over their failure to act on climate.

Second, oil companies are not only borrowing strategy from cigarette companies to downplay the risks of climate change, but are also using the same lawyers and organizations to defend against climate lawsuits. “Big Oil appears to be outsourcing its defense to organizations that actually wrote the tobacco playbook,” reported Vice News yesterday.

Third, the climate denial strategy by Big Oil bosses continues. The fossil fuel industry is talking with forked tongues. On the one hand they spout “climate commitment” and on the other, they carry-on a business-as-usual scenario that is hurtling towards a climate catastrophe.

An investigation by Unearthed and Huff Post, has found that “Shell and BP, the second and fourth largest oil companies by revenue last year, are still active members of at least eight trade organizations lobbying against climate measures in the United States and Australia that were not disclosed in the public reviews.”

Robert Brulle, one of the world’s leading experts on climate denial and professor at Brown University’s Institute at Brown for Environment and Society told Unearthed, “this is a standard business practice. They’re trying to have it both ways, being socially responsible without changing their actual positions.”

The reality is that the industry is dying and shedding jobs in its time old boom and bust cycle. Except this time, it’s heading for permanent bust.

In contrast, a new survey by the International Renewable Energy Agency (IRENA) found that the renewables industry “accounted for an estimated 11.5 million jobs worldwide in 2019, up from 11 million the previous year.”

According to IRENA, its post-COVID-19 jobs plan would create some 5.5 million transition-related jobs over the next three years, bringing renewable jobs to nearly 30 million globally by 2030 and pave the way for “longer-term resilience, development and equality.”

But they warned that “the chronic shortage of skilled workers in the area of expanding access to modern forms of energy could constitute a major barrier to the deployment of renewables.”

We need a global re-training program now. The status quo cannot continue — globally, politicians, and policymakers have a golden opportunity to roll out a radical plan of skills and training, to help train oil workers in a post-COVID-19 world transition from dirty oil into secure, cleaner jobs future.

This re-training program cannot come fast enough for oil workers who are losing their jobs as the bust cycle continues. Earlier today, oil giant Shell announced it was cutting a staggering 9,000 jobs as it tries to save billions in costs. Over 1,500 workers have already taken voluntary redundancy.

Many of these workers could be re-trained and re-skilled. Oil workers are keen to work in renewables. There are signs that a seismic shift within rank-and-file oil workers is happening.

Our colleagues at Platform have just published a survey, along with other civil society groups, on how energy workers in the North Sea oil fields are feeling about their jobs right now and the coming transition.

They found that workers’ moral was genuinely low, with many workers having been furloughed. Thousands of others are losing their jobs. This is neither sustainable nor fair.

But most importantly, many workers are ready to make the jump and see a future away from oil.

?OUT NOW!? We surveyed 1,383 offshore oil & gas workers and 81% would consider leaving the industry

With 43% made redundant or furloughed in 2020, it's time for @beisgovuk and @scotgov to listen to the people their policies impact

The report found that a staggering “81% of offshore workers would consider leaving the industry” and that “given the option of retraining to work elsewhere in the energy sector, more than half would be interested in renewables and offshore wind.”

As Platform states: “A transition to renewable energy is an opportunity to build an energy sector that works for everyone. There is no just transition if it is not worker-led.”

As one oil worker wrote yesterday: “this year has been extremely tough, but it has also offered us a glimpse into the future… It’s clear that things won’t be going back to where they were. Although the industry’s future is unknown, the transition to a new kind of economy could offer the security we need, as well as climate security for our country.”