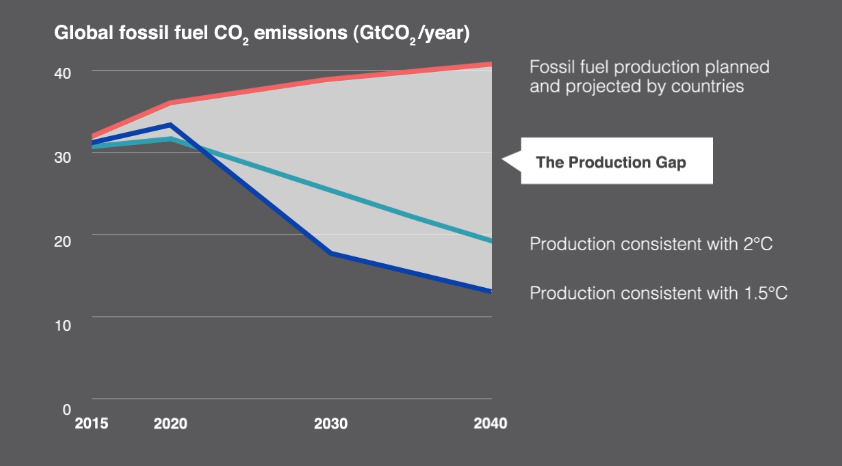 Despite the daily evidence of our climate emergency, from raging wildfires in California and Australia, to floods in the UK and continued record temperatures in the Arctic, we remain in denial.

Despite decades of scientific evidence that we have to stop drilling for fossil fuels, if we want a livable future, we carry on drilling regardless.

A new authoritative report, published by over 50 researchers, leading research organizations, Universities, and the United Nations Environment Programme, has analyzed the so-called “Production Gap” the first assessment of the difference between the 2015 UN Paris climate agreement goals and countries’ planned production of fossil fuels.

And the difference is stark.

The production of oil and gas is on track to exceed carbon budgets, with continued investment and planned infrastructure “locking in” use of these fuels.

The effect of this lock-in would be to widen the production gap over time, until countries are producing 43% (36 million barrels per day) more oil and 47% (1,800 billion cubic meters) more gas by 2040 than would be consistent with a 2°C pathway, let alone the imperative 1.5°C.

This research is the latest in a growing body of work on the critical importance of addressing fossil fuel supply in confronting the climate crisis. Oil Change International’s report “The Sky’s Limit: why the Paris climate goals require a managed decline of the fossil fuel sector,” and subsequent national level reports have drawn similar conclusions: there is far more oil, gas, and coal lined up for exploitation than the climate can afford.

“Despite more than two decades of climate policy making, fossil fuel production levels are higher than ever,” said Mans Nilsson, Executive Director of the Stockholm Environment Institute, one of the contributors of the report. “This report shows that governments’ continued support for coal, oil and gas extraction is a big part of the problem. We’re in a deep hole – and we need to stop digging.”

The report also emphasizes two related issues that Oil Change International has been working on for years: that this continued expansion of fossil fuel production is underpinned by government subsidies to producers, which has to come to an end if we are to meet the UN climate goals, and also there is an urgent need for a just transition away from fossil fuels as soon as possible.

Christiana Figueres from Mission 2020, who was the key UN official who secured the 2015 Paris agreement, told the Guardian, “Ensuring a liveable planet for future generations means getting serious about phasing out coal, oil and gas. Countries such as Costa Rica, Spain and New Zealand are already showing the way forward, with policies to constrain exploration and extraction – others must now follow their lead. There is no time to waste.”

Prof Nicholas Stern, at the London School of Economics, also told the paper: “This important report shows planned levels of coal, oil and gas production are dangerously out of step with the goals of the Paris agreement.”

One of the sectors that needs to act to help the transition is the finance sector. Earlier this month a report from the UK-based charity, Shareaction, revealed that US investors are the “laggards” when it comes to acting on climate and forcing fossil fuel companies to act to address our climate emergency.

Shareaction’s report examined how 57 of the world’s largest asset managers voted on 65 shareholder resolutions linked to climate change and found that the 10 worst performers were are all based in the US, including Capital Group, Blackrock and JP Morgan, amongst others.

The report noted that “the directors of BP, Chevron, ExxonMobil, Shell, and Total were all (re-) elected with on average 97% support from shareholders, despite these companies being some of the largest emitting companies on earth and lacking plans to transition to a well-below 2°C world.”

So Big Oil, backed by these investors, has us all still locked in to an unlivable future. The report’s author from Shareaction, Jeanne Martin, said these investors “have the power to put the brakes on the climate emergency, but they’re on auto-pilot, driving us head-on into it.”

The companies themselves remain on auto-pilot too, happily and recklessly driving us off the cliff.

Another report, published this week in the UK by the High Pay Centre and Trade Unions Congress, revealed that in 2018 the UK’s largest energy company, BP pledged to invest $1-2 billion in “new energy”, whilst the second largest, Shell, invested just $500 million in low carbon energy; at the same time as they paid their shareholders a total of £25 billion.

This equates to less than two percent of their capital expenditure on green technologies, despite the climate crisis. As the report noted: “This is a clear misallocation of capital that is at odds with a just transition towards a sustainable world.”

Shell and BP have known for decades about the climate crisis, yet they just carry on drilling.