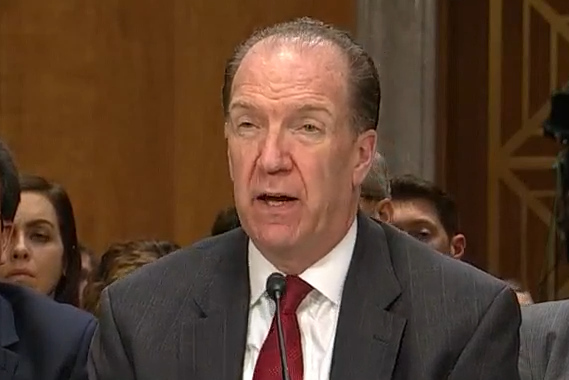 Malpass is an almost-cartoonishly bad choice. If approved, Malpass would be a disaster for the World Bank – and the world. He’s not fit for this role and would drag the World Bank back to climate denial and inaction.

Here are 4 fast facts that show why Malpass should not pass:

The World Bank is the most prominent global development bank, and it is one of the world’s largest sources of public funding for developing countries.

The Board of Directors — representing the many governments who control the bank — will decide on the new president in April, but the window for nominations closes very soon. We need options that weren’t hand-picked by the Trump administration. The window is quickly closing to make that possible. Watch our video to learn more about Malpass:

While the U.S. has traditionally held the World Bank presidency due to a backroom deal struck in the 1940s, there’s nothing preventing the World Bank’s Board of Directors from picking another candidate. The other governments who own the World Bank should stand up and reject Malpass, and then select a leader who will champion action on climate change.

We urge the Bank’s Directors to instead to ensure that the process of selecting a new World Bank Group president meets the following criteria:

You can take action now to tell the World Bank’s shareholders: Pick a climate champion president, not a Trump crony.

It’s not just the backsliding on key promises we’re worried about — we also need the World Bank to keep driving the climate conversation forward. This is the year where the multilateral development banks — a group of nine large institutions like the World Bank — will decide what the Paris Agreement means for their lending. This will directly influence hundreds of billions of dollars in lending per year, and could affect trillions of dollars in spending over the next decade.

We need a climate champion in the driver’s seat of the World Bank for this conversation. We need the World Bank to go further and faster on the critical issue of climate change, not to go backward.  We need to work together to convince other governments that it’s past time to repudiate Trump and pick a real climate leader to head the World Bank.

It’s time to sound the alarm: if Trump gets his way, the big steps the World Bank has taken to cut its fossil fuel finance could be under threat. Let’s make sure it doesn’t happen.