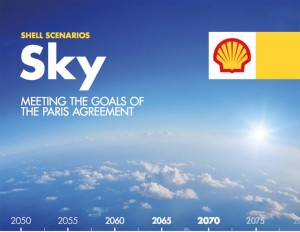 The report received a mixed response. One commentator went as far as saying the internet had supposedly gone “gaga” over Shell’s new “Sky” climate scenarios.

However, not only was Shell’s report criticized by OCI and others, for putting forward a “future full of fossil fuels”, but now that fossil fuel future looks likely to be challenged in the courts in Europe.

The environmental group, Friends of the Earth in the Netherlands has announced that it will take Shell to court if the company does not act on “demands to stop its destruction of the climate”.

A letter from FoE addressed to Shell’s CEO Van Beurden, argues that “Shell, through its corporate activities and corporate strategy, is breaching its legal duty of care by causing climate damage across the globe and undermining the ambitions of the Paris agreement.”

The letter adds: “recent research shows that Shell has been aware of the seriousness of climate change and the substantial role its products play in the root causes of this problem since at least 1986”, but that “Shell has to date taken insufficient action to help prevent dangerous climate change.”

The letter finishes by stating that “Shell’s activities and business model constitute a profound risk for human kind, human rights, future generations and the environment.”

The impending legal case is the first climate lawsuit demanding a fossil fuel company acts on climate change, rather than just seeking compensation for past wrong-doings, such as litigation against Exxon.

According to FoE Netherlands, this ground-breaking case, which is backed by Friends of the Earth International and FoE Europe, “if successful, would significantly limit Shell’s investments in oil and gas globally by forcing them to comply with climate targets.”

Karin Nansen, chair of Friends of the Earth International, added: “This case matters for people everywhere. Shell is doing enormous damage worldwide – climate change and dirty energy have devastating impacts around the world, but especially in the global South. With this lawsuit we have a chance to hold Shell to account.”

The environment group has given Shell eight weeks to respond to the letter.

Adding weight to FoE’s evidence is a newly uncovered Shell document from the eighties, which has been published by the Climate Investigations Centre.

A confidential Shell document from 1988 on the “£Greenhouse Effect” it reveals that by 1988 “Shell was not only aware of the potential threats posed by climate change, it was open about its own role in creating the conditions for a warming world.”

The document argued that the uncertainties around the science was not a cause for delay for action. The company also admitted that its own products were to blame for climate change: It stated: “With fossil fuel production being the major source of CO2 in the atmosphere a forward looking approach by the energy industry is clearly desirable, seeking to play its part with Governments and others in the development of appropriate measures to tackle the problem … The energy industry needs to consider how it should play its part.”

They could be words that come back to haunt Shell in any forthcoming trial. Indeed so could its recent Sky report which shows that 30 years after the company’s scientists warned about the “greenhouse effect” the company is still not taking the issue seriously enough to take the action necessary to prevent dangerous climate change.